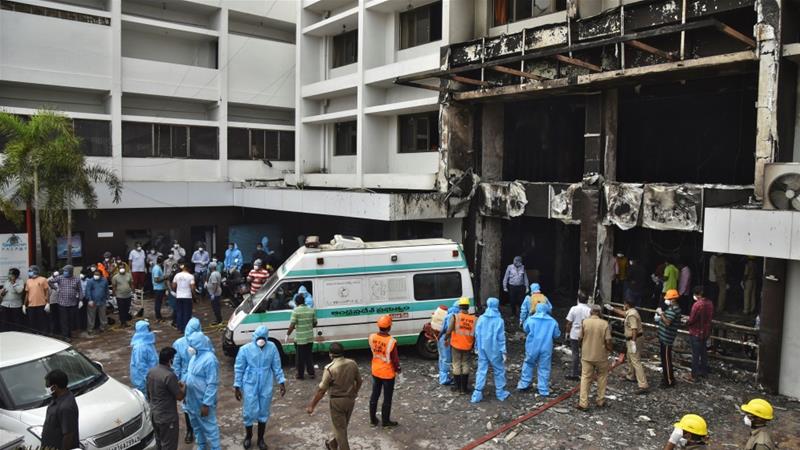 Eleven patients have died after a fire at a coronavirus treatment facility in India, as the country posted a record daily rise in confirmed cases of COVID-19.

The blaze, the country’s second such incident in four days, ripped through the Hotel Swarna Palace in the city of Vijayawada, southeast India, on Sunday morning.

The hotel was being used as a COVID-19facility.

Rescue teams worked to save those trapped in the multi-storey building and 22 people have been taken to hospital, a police spokesman said.

An electrical short-circuit appeared to be the cause of the fire, which broke out at around 5am and was brought under control after several hours, the spokesman added.

Indian Prime Narendra Modi said he was “anguished” by the blaze, adding: “My thoughts are with those who have lost their loved ones.

“I pray that the injured recover as soon as possible.”

On Thursday, eight people were killed in a fire in the intensive care unit of a private COVID-19-designated hospital in Ahmedabad, western India.

Fires are common in many buildings in India because of poor safety standards, with inadequate fire extinguishers, smoke detectors and fire alarm systems..

More than 2,153,000 people have been diagnosed with the virus in India, the world’s third highest total behind theUS and Brazil, according to Johns Hopkins University, which is tracking the pandemic.