45 suspects paraded for terrorism, armed robbery, others In Borno (Photos) 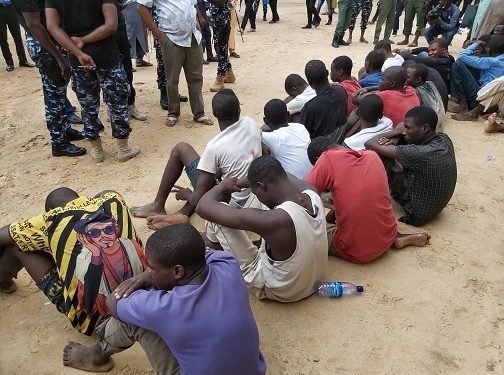 Borno State Police Command has paraded 45 suspects for crimes ranging from terrorism, armed robbery to cattle rustling among others.

Parading the suspects on Wednesday at the police headquarters Maiduguri,  the Command’s public relations officer, Edet  Okon, said the suspects were arrested recently within Maiduguri, Jere and environs.

Okon said on 11th of March 2020, one Alhaji Goni Mallum Mutti of Muna Asheri area of Maiduguri was arrested by the police for being a member of the Boko Haram terrorists group.

He added that the suspect confessed that he was saddled with the responsibility of supplying essentials and other logistics to the terrorists.

Items recovered from the suspect according to the PPRO included N250,000 meant for the purchase of foodstuffs and other essentials; five packets of Maggi cube; two sachets  of Dangote salt; ten packetsof golden penny sugar among others.

DSP Okon further said that 10 suspected armed robbers in the custody of the Command included Ibrahim Garba aka Last ; Adamu Ali aka Bille and Abdulrahman Adamu aka Badda who were arrested by the police having conspired and robbed one Iliya Musa of N49,000 while armed with  dangerous weapons.