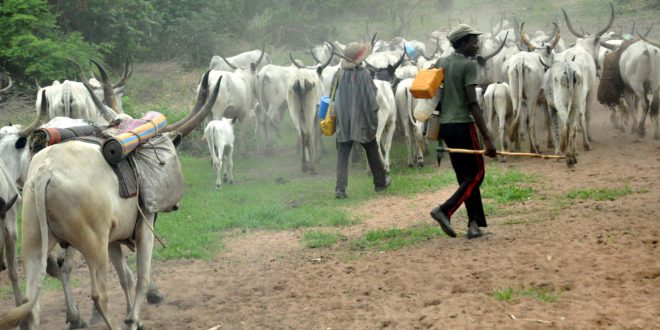 The state governments in Gombe, Benue, Adamawa and Zamfara have signalled their preparedness to receive herdsmen relocating to the North.

The Northerner Elders Forum had, in a statement issued on Friday by its Director, Publicity and Advocacy, Dr Hakeem Baba-Ahmed, called on northern governors “to prepare to receive law-abiding Fulani herders who may be compelled to relocate to the North.”

In a response, the Director General, Press Affairs, Gombe State Government House, Ismaila Misilli, said the state was ready to accommodate its citizens upon their decision to return home.

Misilli said, “Anybody that is from our state and has gone anywhere to look for greener pasture and now, for his own reason, decides to come back home, we must receive him. He is our person, son or daughter, probably. You must receive them.”

Similarly, the Benue State Governor, Samuel Ortom, on Friday, said the state was ready to accommodate any of the fleeing Fulani herdsmen from the southern part of the country on the condition that returning herdsmen who decide to stay in Benue State must obey the law of the state.

Ortom was responding to the appeal by the Northern Elders Forum to northern governors to prepare to receive law-abiding herders who may be compelled to relocate to the North as a result of tension in the South.

The governor, who spoke through his Chief Press Secretary, Terver Akase, noted that the state had no problem with anyone who engaged in legitimate business and adhered to the law of the state.

He said, “As long as they (Fulani herdsmen) are ready to ranch their cattle and obey the Open Grazing Prohibition and Ranches Establishment Law of the state, Benue State will have no problem with them.”

Recall that the state enacted the Open Grazing Prohibition and Ranches Law in 2017.

Also, the Adamawa State government said it was willing to resettle herders returning from the South.

The Director General, Media and Communications, Adamawa State Government House, Solomon Kumangar, on Friday, said the state, which is one of the participating states under the National Livestock Transformation Plan, would be able to accommodate the Fulani herders within a specified time, if that was the decision of the Northern Governors Forum.

Kumangar said, “Adamawa has already keyed into the National livestock Transformation Plan. Recall it was launched in the state in 2019 by the Vice President at Gongoshi reserve. This is also to settle farmers and herders within a specified period.

“If it is the decision of the northern governors to absorb herders who are returning from the southern part, the Adamawa State Government will act in accordance with that decision.”

Matawalle, who spoke through his media aide, Zailani Bappa, condemned any form of discrimination against a people for crimes committed by a few, saying, “This is a complete injustice.”

He maintained that not all Fulanis were criminals, adding that, in every tribe, there were good and bad eggs.

The governor said, “My administration wants to assure Nigerians that Zamfara State will never undermine the Constitution of Nigeria by denying any Nigerian or group of Nigerians free access to the state and free association with its citizens.