Ambrose Alli, 44 others pardoned by council of state 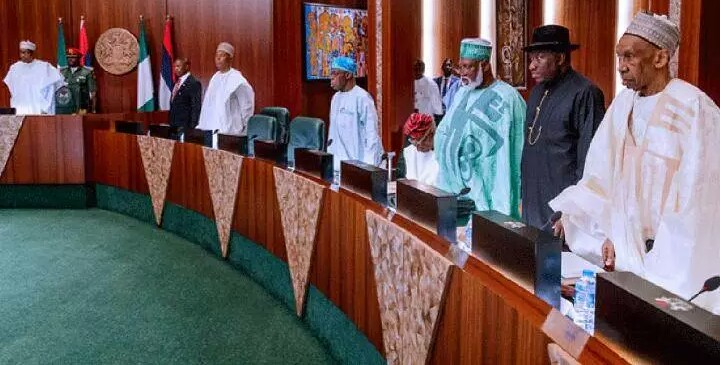 National Council of State Thursday ratified the pardon granted to a former governor of the defunct Bendel State, Professor Ambrose Alli, and three other citizens convicted for attempted coups.

Ali, who governed the old Bendel State, now split into Edo and Delta states, from 1979-1983 in the Second Republic, was convicted during the military rule of Buhari in 1984 for alleged misapplication of over N983,000 in funds for a road project.

Although the late professor returned the money, the military tribunal, which tried him for the offence, nonetheless sentenced him to 100 years in prison. He later became blind before his eventual death.

Aside Alli, the council also approved presidential pardon for 44 others, including two military officers said to have been convicted for attempted coup during the military regime of former military President, Gen. Ibrahim Babangida (rtd.), and a civilian.

Briefing reporters after the virtual meeting, presided over by the president, Attorney-General of the Federation (AGF) and Minister of Justice, Abubakar Malami (SAN), said the ratification of the presidential pardon followed the presentation of a memorandum from the Presidential Advisory Committee on Prerogative of Mercy to the council.

He said the prerogative of mercy granted inmates was part of the efforts to decongest correctional centres to contain the spread of COVID-19 pandemic.

He said: “The memo presented for consultation in line with one of the constitutional requirements and consideration of grant of pardon to 45 persons, two inmates for pardon, 39 inmates for clemency and four ex-convict for presidential pardon.

“What we have today is a consolidation of what has been done and the strategies put in place to see to the decongestion of our correctional centres.

Malami added that the council approved the appointments of two lawyers as members of the Federal Judicial Service Commission in line with the power conferred on the president to appoint members of the commission, subject to consultation with the Council of State.

Mustapha said the council commended the Presidential Task Force on COVID-19 for its job in combating the pandemic and noted the impact of the pandemic on the economy and how it has exposed the weaknesses of the health system.

He said the council appealed to Nigerians to continue to adhere to COVID-19 protocols until vaccines would be available to treat the disease.

According to him, the meeting also approved the nominations of members of the National Population Commission (NPC).

On his part, the National Security Adviser (NSA), Maj. Gen. Babagana Mungonu (rtd.), said he briefed the council on the security challenges facing the country, adding that the council approved the establishment of National Centre for Control of Small and Light Weapons to be domiciled in NSA’s office.

However, while Obasanjo was absent from the meeting, only former President Goodluck Jonathan, among the former leaders, was physically present with the president in the State House.