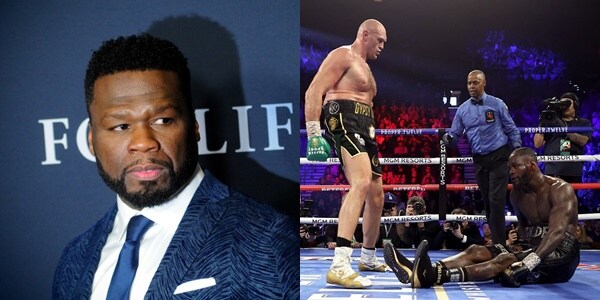 Legendary American rapper and music icon,50 Cent has aimed a subtle jibe at his fellow countryman Deontay Wilder following his devastating defeat to Tyson Fury over the last weekend.

Wilder’s reign as heavyweight undefeated champion was disgracefully brought to a shocking halt via a seventh-round knockout in Las Vega.

Bronze Bomber failed to stimulate a miracle as his enviable CV was violently hammered by a massive surge of dents in his blockbuster rematch against the Gypsy King.

And Curtis James Jackson, known by his stage name 50 Cent, has taken a swipe at the former WBC champion in a series of tweets and Instagram bants accompanied by pictures from the scene of the fight.

The 44-year-old rapper, who has a history of rivalry history with Wilder, posted the picture of American boxer being hit by Tyson Fury and wrote: “Dam’n Blood, what about the gang. smh [sic].”

50 Cent also posted pictured of Wilder being dealt with by Fury alongside the image of Martin Lawrence meme with the caption: “Come on man y’all can’t do my Boy like this [sic].”