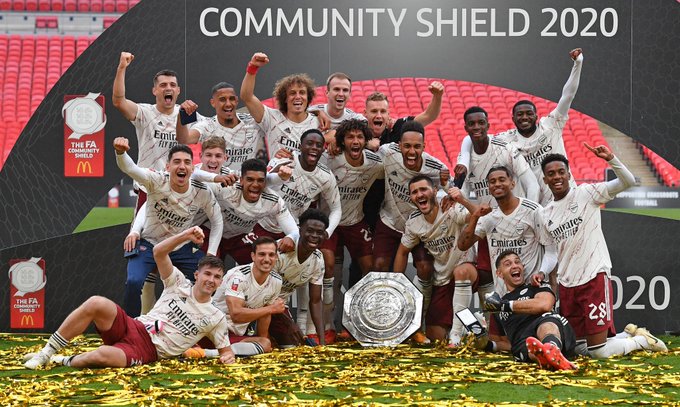 Pierre-Emerick Aubameyang fired the North Londoners in front with a long-ranger stunning shot in the 12th minute of the fixture.

The 31-year-old dribbled past Neco Williams before curling the ball into the right corner of the post with youngster Bukayo Saka claiming the assist for the goal.

Mikel Arteta’s men started the game on a shaky note with the Reds making almost all the advances earlier in the game.

Virgil van Dijk drew the first blood but Jurgen Klopp’s men were denied their chance to lead the game in the seventh minute as the goal was ruled out for offside.

And that gave room for the Gunners to gain confidence and they took advantage of their long-range opportunity.

Arteta’s men maintain their leadership in the game for the rest of the opening half as either side failed to find the back of the net. However, they could not hold on to the lead beyond the 83rd minute as Takumi Minamino restored parity for the Premier League champions.

The 25-year-old was in the right place to tap into the Gunners net a loose ball from Mohamed Salah’s build-up play.

Barely two minutes after the goal Andrew Robertson tried setting up his teammate to double his side’s lead but this time Emiliano Martinez was able to save the Gunners from danger.