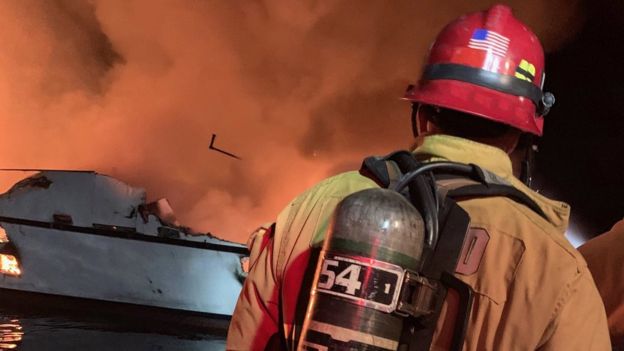 At least 34 people are unaccounted for after a boat was destroyed by fire off the coast of California.

Five people of the 39 people on board were rescued, there are reports of fatalities but no official death toll so far.

The fire broke out on board the boat near Santa Cruz island in the very early hours of Monday morning.

The vessel is now submerged as a search and rescue operation continues in foggy conditions.

Reports say some passengers may have been trapped below deck.

Those who were rescued may have been sleeping in the main cabin of the boat rather than below.

They were awake before rescue teams arrived and had jumped off the bridge of the boat. One survivor has minor injuries.

The bow of vessel, a diving boat known as Conception, is still sticking out of the water.

It was used for chartered trips in the Channel Islands National Park.

It sank 20 yards (18m) off the north shore of Santa Cruz Island, at depths of 64ft (20m). The search for survivors continues.

Related Topics:CaliforniaSanta Cruz
Up Next