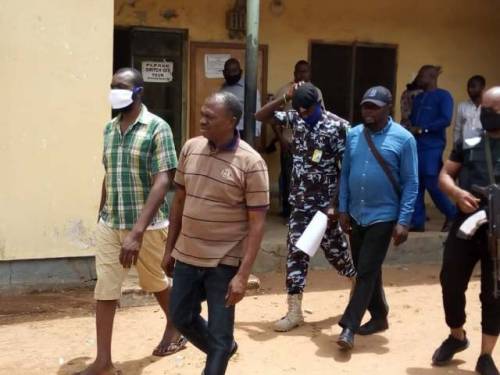 The lawmaker representing Katsina-Ala East state constituency in the Benue State House of Assembly, Jonathan Agbidye has been remanded in prison over an alleged criminal conspiracy and kidnapping.

Agbidye and one Denen Zuamo of Katsina-Ala town were remanded in prison with after being arraigned before a Makurdi Chief Magistrate Court on Friday August 21, were accused of conspiring with other suspects now at large to snatch a Toyota Hilux van with registration number SWA-215-FM and other valuables belonging to Apin Public Health Initiatives along Katsina-Ala -Tor donga road in Katsina-Ala Local Government Area of the state.

During police investigation, both men were arrested with the said vehicle which was re-registered as MKD-992-AD in Makurdi.

The duo are accused of being members of a gang of armed robbers and terrorists headed by the notorious and wanted kingpin, Terwase Akwaza alias ‘Ghana’ who snatched, robbed and abducted the staff of Apin Public Health Initiatives.

Agbidye and Mr Zuamo were remanded in the Federal Correctional Facility in Makurdi by the trial magistrate who adjourned the case to October 12, 2020 for further mention.