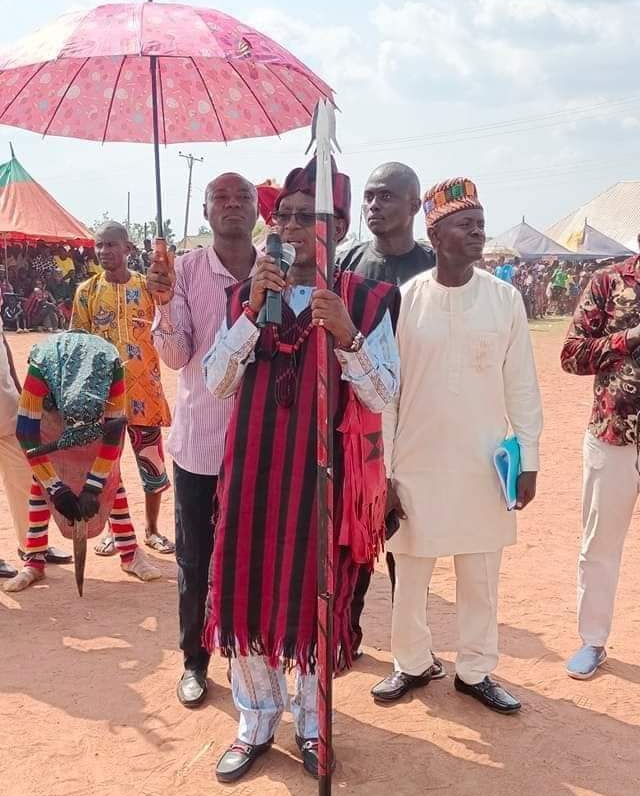 At a colourful ceremony held at Obagaji, headquarters of Agatu LGA, in the revered presence of paramount ruler of the Idoma nation, His Royal Majesty, Dr. John Odogbo Elaigwu, Och’Idoma V, Sir Ngbede was conferred with the Chieftaincy title for his steadfast stand in pushing for the development of Adogoji Kingdom and upholding of her cultural values.

Conferring the title, the Traditional ruler of Adogoji, His Royal Highness, James Ochoche Edo, the Och’Adogoji Eko, showered praises on the recipient whom he described as “a rare gem” in Adogoji and “a weapon of mass community development” upon whom he prayed endless blessings unto his generations after him.

Responding, the newly coronated Ogbenjuwa, Sir Ngbede, said he was humbled by the honour done him with the title conferred on him, pledging to keep doing that which in his words, “will bring development to his community and ensure the peace and security of her people”.

Distinguished Senator representing Benue South, Patrick Abba Moro, Deputy Speaker of the Benue State House of Assembly, Chris Adaji, member of the State Assembly for Ado State Constituency, Godwin Abu Edoor, former member of the House of Representatives, Solomon Agidani, in seperate goodwill messages praised the new Ogbenjuwa describing him as a pillar of rock in the Benue PDP and beyond.

Members of the Benue PDP State Working Committee in a speech delivered by State Publicity Secretary, Bemgba Iortyom, thanked the leaders of Adogoji and the Idoma nation for the honour done Sir Ngbede, stressing that it was to the entire PDP family in the state which the new Ogbenjuwa has led with unquantifiable success since 2016, guiding the party from opposition status back to power.

Guests at the occasion were entertained to a rich cocktail of cultural performances which comprised masquerade displays and troupe dance performances.