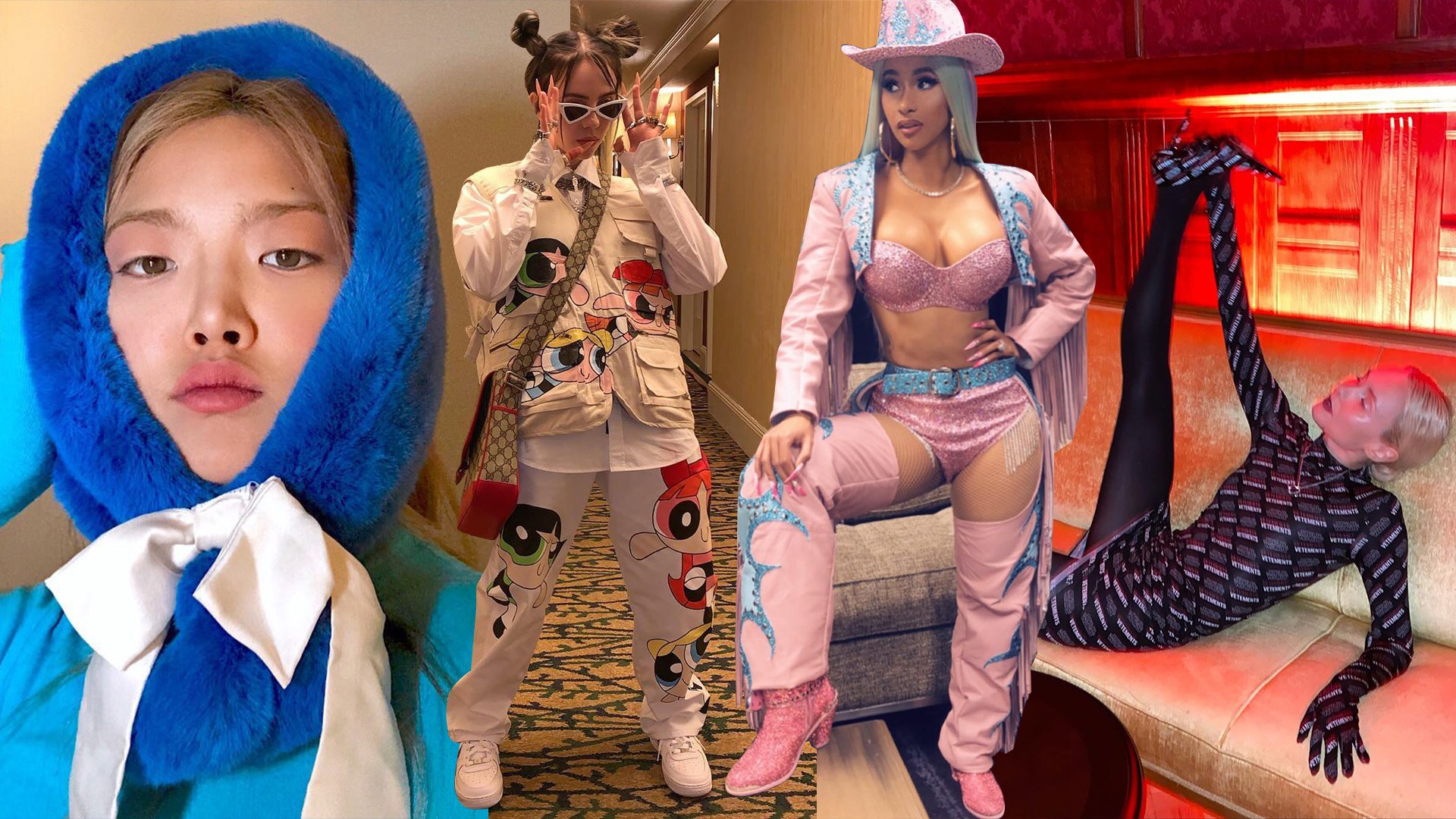 There were, for sure, plenty of fashion-forward selfies to stop you in your tracks. The ’grams that stood out the most though, often spoke to the mood of the moment, whether it was a buzzy red carpet happening—the Met gala, say—or the sudden rise of yeehaw style.

As the newly-minted CEO and artistic director of Fenty, Rihanna injected her social media presence with a singular brand of executive realness. Back in September, she posted several images of herself wearing her own label. Only she could make a white cap, oversized slate blue belted blazer, zip pants, and corset boots look ready for the boardroom.

Marc Jacobs has been having a stellar time perfecting his selfie game this year. His best moments combined experimental pieces by his favorite labels (Commes, Balenciaga, Rick) with his own designs. Just this month, he uploaded an #OOTD consisting of a Magda Archer x Marc Jacobs “I hate art” sweater, a Celine leopard print coat, a Comme des Garcons kilt, and huge Rick Owens platform boots.

In the world of reality TV however, nobody’s been having more fun with fashion than Kourtney Kardashian. With the help of her stylist Dani Michelle, the eldest sister of the Kardashian-Jenner clan came into her own this year. She flaunted the most coveted vintage pieces of the last 12 months, too, including a vintage Vivienne Westwood corset and Old Celine leather coat. Perhaps her most defining moment came back in August when she made a splash on news wires stepping out with Simon Porte, the handsome French designer of Jacquemus, in Los Angeles. Only two days after the outing, she celebrated the meeting by posting an Instagram of herself wearing a full Jacquemus look from the Spring 2020 collection—a blazing fuchsia jacket and kicky plaid pants—look #46 to be exact.

There were other happy twosomes in the mix, starting with Jennifer Lopez and Alex Rodriguez. The pair announced their engagement in March and have proved themselves to be an Instagram style match made in heaven ever since. One of their finest fashion moments together? The Met gala in May. Lopez wore a thigh-revealing Studio 54-style halter Versace dress, which included a crystal headpiece–right on theme for over-the-top camp–while A-Rod was dapper in a pink suit. The two documented the moment from the back of a limousine, no less. Now, if only we knew what they will they wear to their wedding next year?

If there is one woman who is bound to take 2020 by storm , it’s got to be Billie Eilish. The Gen-Z singer captivated the world with her synthy music and her “Tumblrcore” style this past year. You will have certainly noticed her in your feed sporting all-things baggy and bright with a designer edge. Think, chunky Gucci sneakers. A medical mask. Something with anime print on it. The selfie she posted while on tour in Australia in the spring was a clear sign she had hit her stride, racking up hundreds and millions of likes. The outfit was as eye-catching as it gets—highlighter yellow look that included an oversized T-shirt, raver pants with a reflector stripe, fingerless gloves, speed shades, and her phone in a monogrammed Louis Vuitton phone case. Clearly, the future is bright.