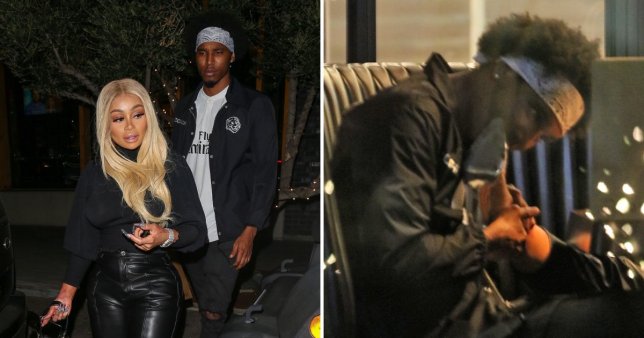 Blac Chyna was spotted getting her toes sucked by a mystery man while out on a date.

The model was pictured out with her new guy having dinner in Woodland Hills, California.

Blac looked stylish in an all-black outfit – a cosy black jumper paired with black trousers, while her date opted for a more casual outfit of a t-shirt, ripped jeans and trainers.

During dinner Blac’s date wanted a lot more than what was on his plate to eat. In the intimate pictures Blac’s feet can be on the chap’s lap as he sucks her toe at their table in the restaurant. There is a time and place for this, but for Blac her man a public place where people eat is just fine.

Blac was previously linked to rapper Soulja Boy earlier in the year, however the two called it quits on their relationship just after a few weeks of dating. The two decided to break up following a huge argument regarding Blac’s ex-boyfriend, rapper Tyga, according to a source from TMZ.

The 31-year-old was previously in a relationship with the rapper between 2012-2014, with the two having a son, six-year-old King, in 2012. She later got with Keeping Up With The Kardashians Star Rob Kardashian in 2017, before they split in 2017. Together they had a daughter, two year-old Dream, in November 2016. And in 2018, she also dated rapper Almighty Jay, despite the relationship receiving some criticism from fans due to the 12-year age gap.

BBNaija housemates Mercy, Seyi, Frodd, two others makes it to the final