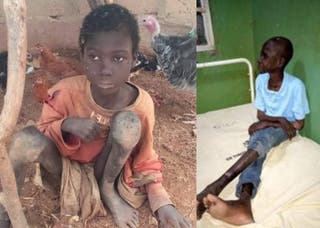 Kebbi State Government has taken over the responsibility of a 10 year old child who was rescued by a human rights group.

The abandoned Jamilu Aliyu who was chained in the stall of goats for two years was mostly denied food and resorted to feeding upon the food given to the animals he was staying with while sometimes eating his own faeces for survival.

New Media Assistant to the governor, Aliyu Argungu, in a statement on Tuesday said the boy’s ordeal started after he lost his biological mother.

The aide added that Aliyu is at the Yahaya Specialist Hospital Birnin Kebbi and responding to treatment.

His father, Aliyu Badariya, and stepmothers are in police custody and will face the full wrath of the law.

The statement announced that Governor Atiku Bagudu has submitted a bill to the House of Assembly for protection of victims and penalties for such offences.

Related Topics:Kebbi State
Up Next