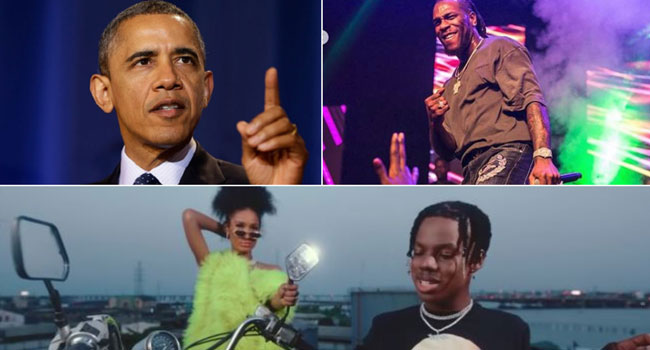 Obama lists tracks by Burna Boy, Rema among his favourites for 2019

The 44th president of the United States of America, Barack Obama has released his favorite tracks of 2019 continuing in his tradition of sharing his year-end lists of his favorite books, films and music.

The former president who took to his official Twitter handle, @BarakObama to share his playlist for 2019 listed ‘Anybody’ by Burna Boy and ‘Iron Man’ by Rema in his favorite music alongside 33 other tracks.

“From hip-hop to country to The Boss, here are my songs of the year. If you’re looking for something to keep you company on a long drive or help you turn up a workout, I hope there’s a track or two in here that does the trick,” Obama tweeted.

This is the second time Obama will list Rema’s song in his playlist. In July, he listed Iron Man by Rema in his summer playlist.

The playlist also features several songs in Spanish, and artists from a wide list of genres — from country to hip hop to Latin and rap.