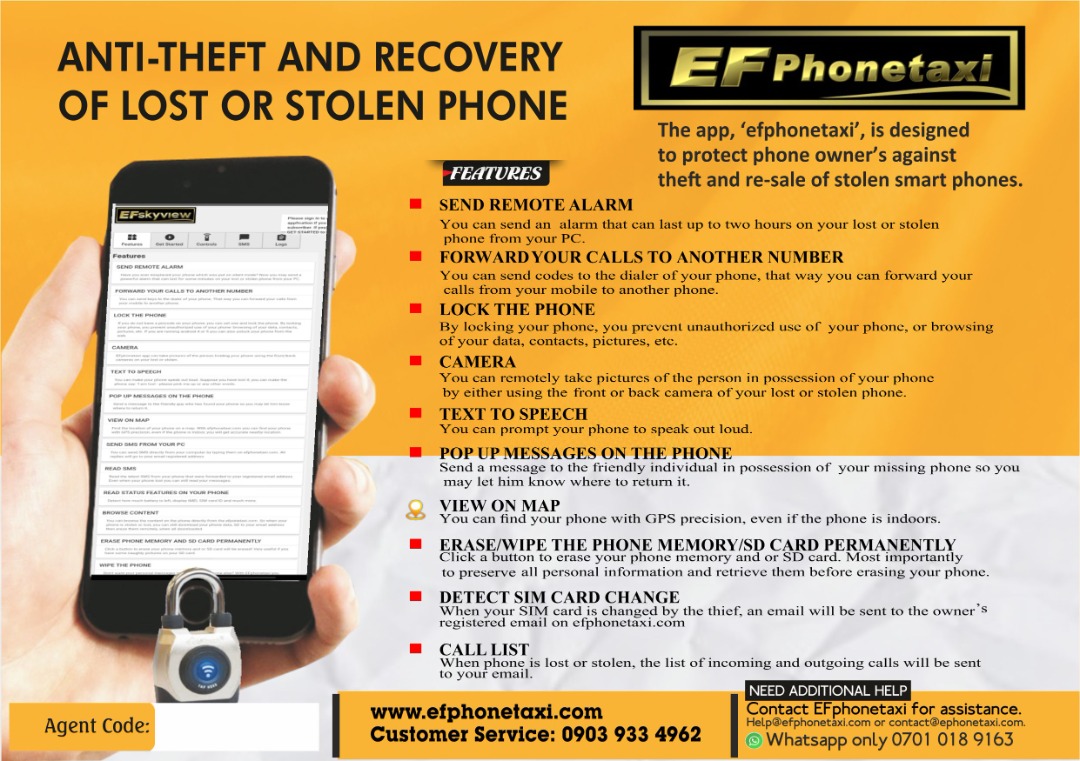 Buying and selling of used phones now in Nigeria require KYC (Know Your Customer) due to the introduction of efphonetaxi. Those Smartphone sellers not practicing KYC may regret it the day phones they sold are returned for refunds, because they were locked as stolen or lost phones. This KYC assessment involves verifying the addresses and all information provided by their new customers.

Thousands of Nigerians are rushing to install this app to protect their phones and stored data. Once installed the app locks out unauthorized users; anybody stealing or finding it when lost cannot use it or access any information on the phone.

With the humongous number of well over one million phones stolen in Nigeria yearly according to experts and the numbers of other stolen phones from all around the world that finds its way into the Nigeria market efphonetaxi protects all involved.

Whether in the church or mosques- sacred environments, phones are stolen there. This shows that the phone thieves don’t even fear God; instead they find religious centers as a major avenue to steal phones, among other places. The “one chance” thieves tormenting car passengers usually go after the phones of the passengers.  Many vulnerable young ladies parading expensive phones and hooked on social media are attacked daily by phone thieves in many cities in Nigeria, just to steal their Smartphone. All these stretch the Nigeria Police very thin in responding to phone-related crimes.

The recently launched app by E.F. Network Ltd, efphonetaxi, is yielding tremendous fruit with the Nigeria Police experiencing joy about technology that will assist them reduce phone crimes.

Hello KYC, now Smartphone sellers in Abuja and environs have started contacting E.F. Network to confirm if the phones they are about  to purchase are safe for them to buy or not. They are refusing to buy used phones from strangers. This shows that efphonetaxi is showing the initial positive result.

Deterrence is an effective crime-fighting tool and the psychological impact of this app is a very significant one for Nigerians, especially for anybody who has been a victim of phone theft.

When phones are lost or stolen, the owners cry more about the data, contacts and records stored on their phone which they can never recover. The phone owners cry not only for the device but more for their stored information and records.

Yes, not anymore, the answer is for the phone owners to install efphonetaxi and recover their stored records on the phones and lock the phones from unauthorized users which can only be unlocked by the owner, otherwise, the phone is rendered worthless.

No more personal records or contacts on the stolen or lost phone for all and sundry to see.  Your privacy is protected. It is on record that stolen phones have been connected to many crimes, as criminals would not use their own registered phone numbers to commit phone related crimes, similar to how car thieves use stolen cars to commit crimes.

The efphonetaxi.com app renders a stolen phone useless when remotely locked or even facilitates the arrest of the thief. The owner of the phone performs efphonetaxi commands remotely without the thief knowing what is happening, including snapping the pictures of the thief. Another beauty of the app is that the icon on the phone can be hidden where the thief won’t even know it is installed and codes or PIN only known to the owner is used to operate the phone remotely.

Should the owner be harmed, the pictures of the thief taken remotely by the owner or relative with the phone owner’s with PIN can be helpful to law enforcement agencies.

E.F. Network recommends that the phone owners share their PIN CODE with only trusted family members who can assist perform remote commands in the event the owner of the phone is incapacitated. The app locks the phone when the owner or authorized user declares the phone lost or stolen and begins the recovery exercises. If no recovery attempt is made, then efphonetaxi may not know that the phone is lost or stolen unless the family contacts the customer service number for help at 0903 333 4962.

We are the only phone anti-theft provider in the world with live customer service center. The app can be downloaded at:  www.efphonetaxi.com.

Another irony of efphonetaxi app is that E.F. Network does not know the identity of subscribers, because subscribers do not have to use their real names to register. Any subscriber can use any name as username and not real name and also use any Gmail account. We are only protecting the phone and giving tools for owners to regain control of their phones and equally retrieve their stored information remotely.

Even when the thief changes the SIM, information on that new SIM would be sent to the owner. Truly anybody buying a stolen phone with efphonetaxi app is just giving up him/herself up for arrest or wasted money.

About ten days ago, one Mr. Odinaka  a business relationship officer of one of the big banks in Nigeria, contacted E.F, Network on his experience at UTC Abuja, He visited that popular UTC, a commercial centre  in Abuja  metropolis, where office  equipments , printing, or repairing of all sorts of electronics, gadgets and phone transactions are done daily. In his surprise, he overheard the union members discussing about their decision not to buy any used phones from strangers again unless KYC is confirmed.

Their fear, he learnt was that if they buy phones with efphonetaxi app installed, and if those phones happened to be stolen, lost or used to commit a crime victim, that the buyers may return for refunds when the phones are rendered useless or even reported to the Police.They also worry that they may be arrested in addition to refunding the money to the buyers, whereas the strangers that sold the phones may not be found.

Therefore, to avoid these risks the phone sellers said, henceforth, only known owners – who are KYC Compliant will sell used phones to them. In other words- they will buy from known customers they can trace if something goes wrong.

With that news from phone sellers union, the phone thieves would gradually be going out of business or seeing their business becoming unprofitable. This can save the Nigeria government hundreds of millions of dollars yearly spent on smartphone replacements, which are capital flights that put pressure on the Naira.  All phones in Nigeria are imported, which affect the economy of Nigeria. Nigerians import more phones than the total population of Nigeria.

It is to the interest of phone owners to install this superior anti-theft app that is the best in the world today.

Mr. Ebenezer Ikeri, the Technical Director of E F Network advises legitimate phone owners to uninstall the app before selling it legally. The app was only designed to prevent illegal smartphone acts and not legal acts.

Furthermore, the Director, corporate Communications, Mr. Ameh Ochojila, said,  the company has established customer service numbers both in English and Hausa languages to carter for the overwhelming reception of the epfhonetaxi.com. The English line is 0903 933 4962 and the Hausa line is 0703 395 8905.

Mr. Ochojila urges those who had challenges registering on the website to be patient because hundreds of thousands of users visit the website daily and due to poor network connectivity some were not able to complete registration.  Anybody with such experience should contact customer service lines for assistance.

E.F. Network will continue to promote the safety of Nigerians by  continuously researching, developing, acquiring new products and services  that would make Nigeria a safer country. Life is priceless and to E.F. Network saving lives and property is a social responsibility.

POS Terminal Scam Alert When Making A Transaction (See How)