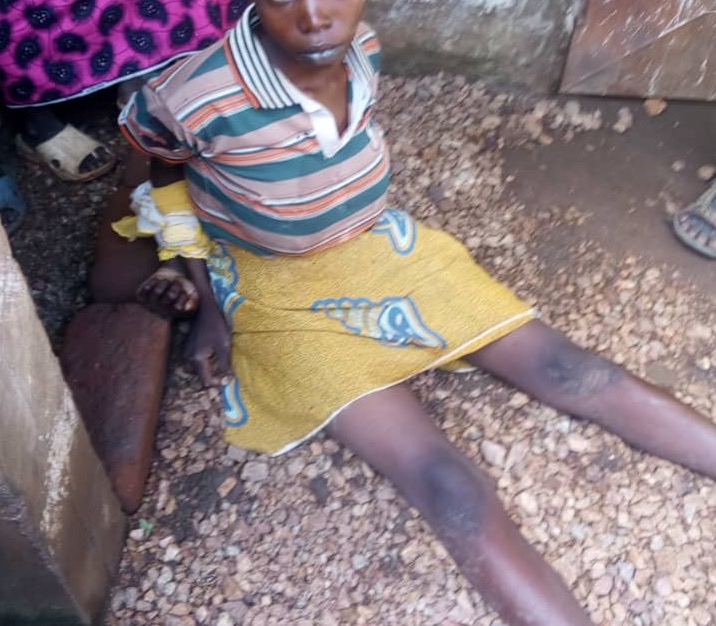 Security officers in the North Region of Cameroon are still battling to find answers to what pushed a woman to kill 2 of her daughters to have for a meal.

The incident happened in the Benue Division, Pitoa sub Division in a village, called Badjingo .

Salamatou Amadou was taken into custody by security officers on Thursday September 17, after the gruesome act was reported .

The 24-year-old woman will face charges for man slaughter. She admitted to killing her 2year-old and 6-month-old daughters, dismembered their mortal remains and had the remains cooked.

On Thursday afternoon, four shocking pictures went viral on social media. One of them showed a woman in casual wear, seated on the ground, with both hands tied behind.

A graphic image showed the feet of a child, many believed were those of her two-year-old daughter, partly submerged in a pot. She had been cooked by her own mother.

A stump of one of the bodies was contained in a blue kitchen dish. It was smaller and could be that of the 6-month-old baby.

A crowd of onlookers stared in disbelief as the security officer, swayed his bike to take her away.

The woman told security officers, she had ‘ slaughtered her daughters to have for a meal , and had ‘eaten’ the liver, heart and intestines.

Since the news broke, many gripped by shock, have questioned why a Mum would commit such a heartless, inhumane and despicable act.

Some people think she might have lost her senses at the time of the act. Others feel she may be involved in some sect . But a vast majority of the public is still at a loss and believe the security officers will provide more convincing answers when results of their finding will be made public.