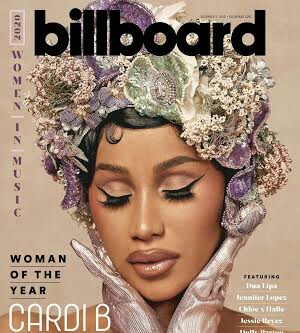 Female rapper, Cardi B has been named the ‘Woman of the Year’ by Billboard magazine.

The Grammy award winning hip hop artist shared her successes as a female rap star in a male-dominated genre during the interview with Billboard’s Carl Lamarre for their special ‘Woman of the Year’ issue.

The photos taken of the 28-year-old ‘WAP’ rapper christened Belcalis Marlenis Almanzar for the special issue showcases exquisite designs as she looks regal in all of them.

Describing her philosophy, the mother of one says:“I want to show people that you can do positive things, but you can also be yourself. I like justice. I like to work and be creative. But I also like popping my honeypot.”