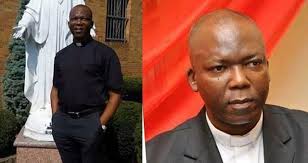 The Catholic community, Onitsha Archdiocese of Anambra State has been thrown into mourning following the reported death of her Director of Social Communications, Rev. Fr Pius Uchenna Ukor.

Ukor, who was the priest in charge of the Onitsha Archdiocesan owned newspaper, Trinitas, was described as a happy and easy going.

He reportedly slumped and died in a football pitch in Asaba, Delta State, Wednesday evening while coaching a football match between the Catholic priests of Onitsha Archdiocese and Issele Uku diocese.

The death has also been confirmed on the verified Facebook page of the Catholic Bishops Conference of Nigeria, CBCN.

The statement from the page said: “Just yesterday, Onitsha Archdiocese lost one of her priests to death.

“Rev Fr Pius Ukor slumped in the stadium at Asaba while the Archdiocesan Priests were playing a football Match with the Issele-Uku Diocesan Priests.

“He was a bit resuscitated by the nurses and rushed to the FMC hospital in Asaba but on reaching there, he was confirmed dead.”