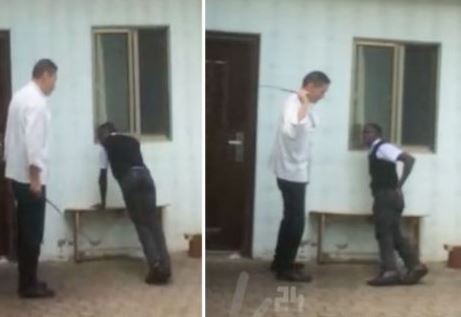 Four Chinese nationals including a chef have been arrested after they were captured on video flogging a Kenyan at Chez Wou restaurant in Kileleshwa, Nairobi.

Confirming the incident, Directorate of Criminal Investigations – DCI, director said they had arrested the four after reports that a man of Asian descent was assaulting a male employee.

“Following reports of an incident doing rounds in sections of the press depicting a man of Asian descent assaulting a male employee said to be working at a hotel, this morning detectives from Kilimani raided Chez Wou Restaurant in Kileleshwa in pursuit of the matter,”  the statement reads.

The perpetrator one Deng Hailan, a Chinese National who works at the hotel as a chef but doesn’t have a work permit was arrested.

Also arrested were two other chefs Chang Yueping & Ou Qiang who hold expired Visas. Chang holds a work permit but his compatriot doesn’t. Yu Ling a cashier at the hotel holding a visitor’s visa but without a work permit was also arrested.

Eight Kenyans who work at the hotel were also escorted to Kilimani Police Station for further interrogation.