Chinese Politician caught by wife in bed with another woman 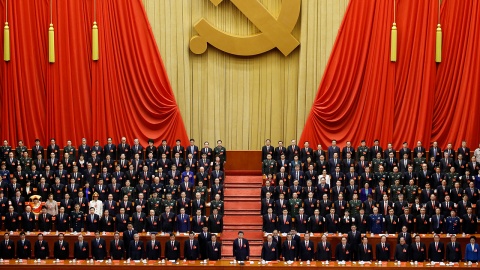 A Chinese Communist Party official has been sacked after his wife allegedly caught him in bed with another woman.

Leaked video clips of the altercation went viral this week, sparking an outcry.

The official, a leader of a town in the province of Guizhou, was fired yesterday after the local party authority had a discussion.

The man, identified as Jia Ding, was stripped of his post as Party Committee Secretary of Yongle Town, which is in Xinpu New Area in Zunyi City.

Footage in question started circulating on Chinese social media from Wednesday after reportedly being shared by Jia’s wife.

Descriptions that came with the videos claimed a half-naked man in the video was an official in Xinpu and a woman in underwear was his lover.

One of the video shows a woman, who is wearing a salmon pink top and said to be Mr Jia’s wife, screaming at the alleged mistress.

The suspected lover tries to cover her face and tells the furious wife: ‘This is your problem. Can you discuss yourself? It has nothing to do with me.

The wife then attempts to grab the alleged mistress’s face to show it to the camera. She yells ‘show it clearly’.

She and a male helper then shout ‘call the police’.

Jia’s alleged girlfriend begs the wife not to use violence and the shirtless Jia then appears in the frame trying to pull his wife away.

In a separate clip, a middle-aged woman believed to be Jia’s family member accuses his wife of being ‘a shrew’.

The family member also claims that Jia only made a mistake that 90 per cent of the men would make.

The Party Work Committee of the Xinpu New Area yesterday confirmed the authenticity of the footage and the man’s identity.

The authority said in a statement that it had decided to remove Jia from his position after a discussion.

Further investigation has been launched, according to the statement.