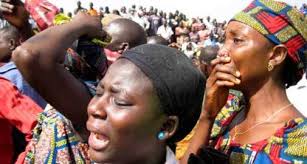 The Christian Association of Nigeria (CAN), Benue State chapter, on Sunday declared that it had lost faith in the country leadership and appealed to the international community to intervene in the spate of killings in the country.

The CAN Chairman in the state, Rev. Akpen Leva,  stated this when he led Christians in a match around Makurdi town to protest the killings and bloodshed in parts of the country which has become a source of worry for every concerned Nigerian.

He lamented that the country was recording more mass burials than ceremonies, warning that Nigeria was on a precipice.

He said: “Enough is enough, the bloodshed has become too much. We are in a country where the life of a cow is more important than that of human.

“What a nation, we now live in fear. Nigerians are killed and their killers walk around freely without the authorities arresting them, our hearts bleed and we cannot continue like this.

“Our leaders must be alive to their responsibilities and save our country the bloodshed and killings of Christians which is perpetrated on a daily basis.

“We are also appealing to the international community to step into the Nigerian situation and stop the ceaseless killings of Christians before we are totally wiped out.”