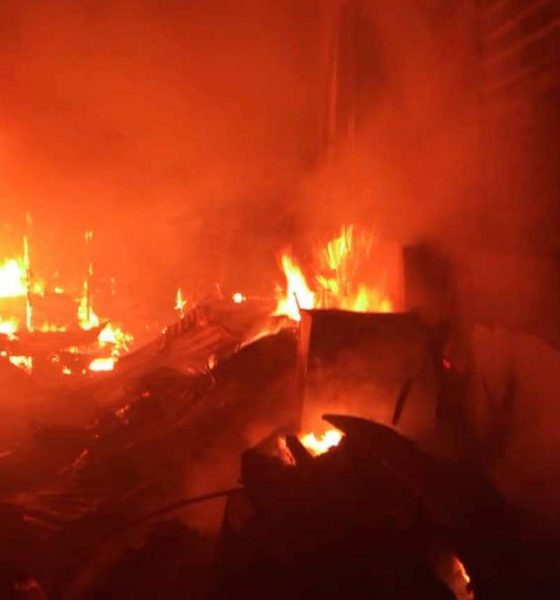 Fire has razed down the Delcma Section of Sapele Market, in Sapele Local Government Area of Delta State.

The fire destroyed properties worth several millions of naira, as warehouses and shops where provisions are kept were not spared.

An eyewitness said the fire was caused by a power surge in one of the shops when the Benin Electricity Distribution Company, BEDC restored light in the area as there has been darkness for days.

The eyewitness said, “the inferno then gradually spread to other part of the shops before fire fighters came in.

“I was inside the market when the fire started. We suddenly heard people shouting fire fire; when we got to the scene of the incident, we found out that the fire was as a result of a power surge when BEDC brought light.

We had to reach the market management committee to call the fire fighters.”

Comrade Benson Okorodudu, a member of the Market Committee who spoke on the incident, narrated how at first the terrain was not accessible for fire trucks and the role traders played to evacuate some wares.

While noting that the cost of the goods destroyed cannot be immediately quantified, he said a committee will be put in place to do that, as well as prevent a future reoccurrence.

The Sapele Local Government Council Chairman, Hon. Eugene Inoaghan commended the prompt response of the fire service, stating that traders should be safety conscious when they handle electrical appliances.

He also promised to provide assistance to the affected shop owners to cushion the effect of the loss.

Jigawa State Governor, appoints special assistants for each of his 3 wives, others ( photo)