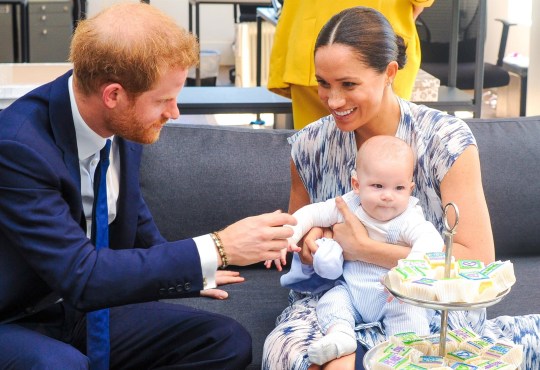 Meghan Markle has flown back to Canada leaving husband Harry to deal with crisis talks in the UK, according to reports.

Eight-month-old son Archie is said to have stayed with his nanny there while his parents flew home to London to release their bombshell statement that they would be quitting as senior royals.

Sources told the Daily Mail that she had not planned to stay long in Britain after arriving on Monday, following the family’s seven week break in Vancouver. The news comes as the Queen ordered all four royal households to find ‘workable solutions’ to the crisis ‘within days not weeks’.

A Buckingham Palace source said the royal family was working ‘at pace’ to sort out the couple’s new situation. The royal family will talk to multiple governments which suggests US and Canadian officials may be involved.

One of the complicated issues will be where funding for the couple’s round-the-clock security will come from. Their statement – and a new official Sussexroyal.com website – has also raised questions about media access to their royal events and how they will pay for their future lifestyles.

If the royals barring Meghan were to meet in person, they seem to have the next five days free of any public engagements. The Duke of Cambridge is due to be in Yorkshire for a number of appearances next Wednesday, alongside the Duchess of Cambridge.

Meanwhile, Harry is not expected to be seen in public again until next Thursday, when he will do the draw for the Rugby League World Cup in 2021. Given the Queen’s timetable of ‘days’ it is likely they will want any talks concluded before Prince Charles travels to Israel and the Occupied Palestinian Territories at the end of the month, to mark the 75th anniversary of the liberation of the former Nazi concentration camp, Auschwitz-Birkenau.

Related Topics:CanadaMeghan MarklePrince Harry
Up Next