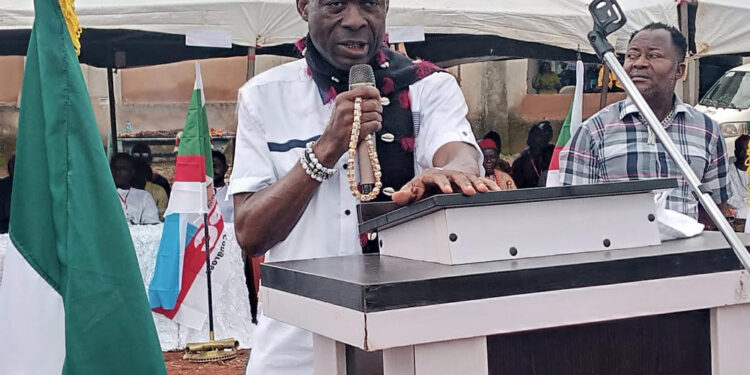 One of the delegates at the just concluded presidential primary of the All Progressive Congress APC, Alhaji Abubakar Usman popularly called Young Alhaji was on Saturday at his country home Orokam in Ogbadibo Local Government Area of Benue State, to share the gains of the 2022 national delegates’ convention with his people.

The philanthropist Alhaji Usman Abubakar said the were twenty seven 27 from the Benue South senatorial zone who went as delegates but he has returned to his people to thank them for finding him worthy to send since they returned as millionaires and since ” charity begins at home”.

Alhaji Usman who gave out a cash donation of N3.5 million cash, also distributed 600 bags of 10kg rice and 600 wrappers not just to the people of Orokam wards 1, 2, 3 but to the entire members of APC in Ogbadibo Local Government.

He also used the occasion to thank the leader of the All Progressives Congress, APC, in Benue State, Sen. George Akume and the party State Chairman, Comrade Austin Agada, under whose leadership he was made a national delegate of the party.

In his a remark Oba of Yoruba in Idoma land, Amb. Umar Ajape, described the occasion as unique saying it was the first time a national delegate returned to his people to share the impact with them. The Oba who congratulated the Ogbadibo people for finding Young Alhaji worthy to serve as their 2022 national delegate urged other politicians to make him a point of emulation.

In their separate remarks APC Chairman for Ogbadibo Local Government, Hon Andrew Edache, and Bishop Benson Ijache said that Young Alhaji had demonstrated the qualities of a good leader and his selfless gesture debunked the claim by other politicians that there is no money in being a national delegate. They encouraged the benefactor to sustain his sacrificial service to humanity.