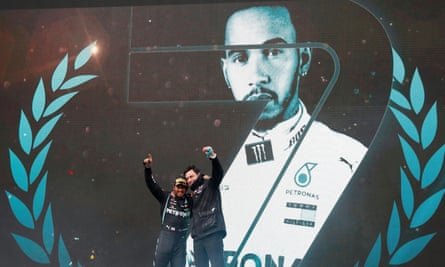 Lewis Hamilton claimed the 2020 Formula One world championship at the Turkish Grand Prix with a remarkable win, taking his tally to seven titles to match Michael Schumacher’s record.

The champion secured his position as the most successful driver in the sport’s history.

Sergio Pérez was in second for Racing Point, with Sebastian Vettel third. The German’s Ferrari teammate Charles Leclerc was in fourth. McLaren’s Carlos Sainz was fifth.

Talking on the team radio after taking the chequered flag, Hamilton said: “For all the kids out there who dream the impossible … you can do it too, man. I believe in you guys. Thank you so much everyone for your support.”

Speaking to Sky Sports, he added: “We dreamed of this when I was young, when we were watching the grands prix … and this is way, way beyond our dreams. It’s so important for kids out there to hopefully see this – don’t listen to anybody that tells you you can’t achieve something. Speak it into existence, you’ve got to work for it, you’ve got to chase it. Never give up and never doubt yourself.”

Schumacher’s records were thought to be untouchable but Hamilton has not only matched some and beaten others but is in every position to set new benchmarks way beyond the German’s tallies. He has already surpassed Schumacher’s records of race wins and poles with 94 and 97 respectively.

This season has been a lesson in why he has reached such heights. He has been simply indomitable with 10 wins and nine poles from 14 races; no driver has come close to even putting him under pressure, including Bottas, who is in identical, dominant Mercedes machinery.

The title also represents another milestone for Mercedes. Having secured the constructors’ championship at the last round in Imola, they now have taken a record seventh consecutive drivers’ and constructors’ double this weekend. They have been unbeaten as a constructor since the turbo-hybrid era began in 2014 and for most of those years have been quite untouchable.

Related Topics:F1Lewis Hamilton
Up Next