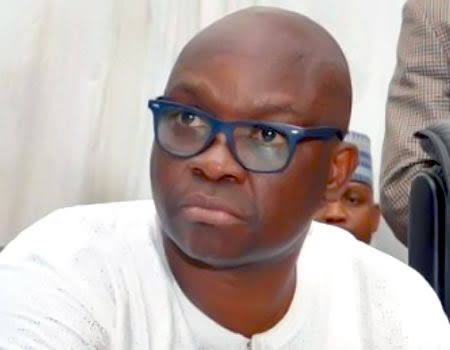 The Ekiti State chapter of the Peoples Democratic Party, PDP, has accused ex-governor Ayodele Fayose of selling the party secretariat to himself by proxy.

The PDP while threatening to sue Fayose, added that the secretariat which was a collective property of the party members was allegedly sold by the ex-governor to one of his cronies without the knowledge of the State Working Committee (SWC).

This claim was made by the party chairman, Barr. Gboyega Oguntuase in Ado-Ekiti, the State capital on Thursday while addressing journalists on the recent development in the party.

Oguntuase said the SWC never partook in selling the secretariat, claiming that the ex-governor forged their signatures.

Explaining he“What Fayose said that we sold the property in collaboration with him, is cruel, untrue and slanderous. I believe that by that statement, he has committed libel on a high scale.

“To the best of my knowledge as chairman of the party, and to the knowledge of many SWC members, we have not sold the secretariat. I want to tell you that any document they say they have, it is absolute falsehood.

“It is true he approached me to sign a document, but I told him, it was going to be a disservice to the party. I told him I can’t sign and I did not sign. God of heaven knows that that was exactly what transpired in his house. He even asked me what I want to take and I told him I can’t take such a sacrilegious offering.

“Our property if it has been sold via fraud, shall be recovered via thorough and extensive legal action that will be taken by this party. We have received assurances from loyal party leaders that they are with us.

“He claims that the property was sold at foundation level, but we monitored the construction up to the second and third floor. So, it is untrue that we have sold the property and if the governor has done it, he should retrace his step and surrender the document to the party”, he said.

He added that Fayose, while in office as governor brazenly displayed acts of impunity as he ran the party like his private fiefdom without recourse to party’s organs and structures.

He alleged that the ex-governor subjected the SWC and the party staff to ‘horror’ and ‘torture’, saying they were abandoned to suffer untold hardship and languish in poverty while being owed 17 months stipends payable to party officials.

Nigerians understand, sympathise with me – Buhari