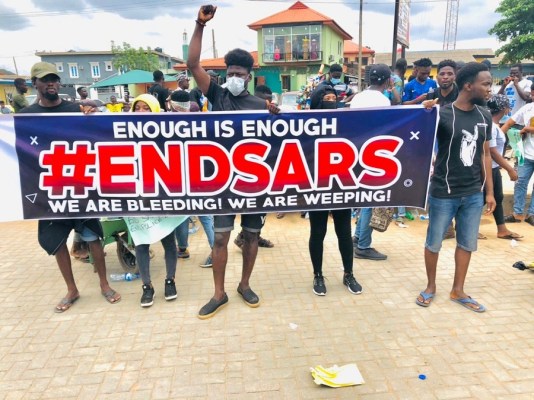 Fresh protest on Thursday erupted in Lagos State with parents demanding justice for their children.

The fresh protest which broke out at Tejuosho Area of Yaba Local Government Area of the State saw parents, in their numbers, chanting, “wetin we want? Justice! How we want am? Now now!”

This is happening after the Nigeria Police filed a suit on Thursday demanding an immediate end to the judicial panels of inquiry going on in different states of the country.

The panels were set up by state governors, in accordance with the recommendation of the National Executive Council, NEC, to probe allegations of police brutality especially by men of the disbanded Special Anti-Robbery Squad.

The police, through its lawyer, O. M. Atoyebi, argued that the states lacked the power to set up panels to investigate activities of the police force.

#Endsars protest live at tejuosho road yaba Lagos by our mothers.. the pace has been set.. it’s time to speak up.. #SoroSokeGenerationTheir placard says âwe march for our childrenâ#SoroSoke
God bless these old women in the sun protesting for us!!!#EndPoliceBrutality​pic.twitter.com/Cx56slEbav— ShortFuse (@Odafe_D)December 3, 2020

Related Topics:#EndSARSLagos State
Up Next