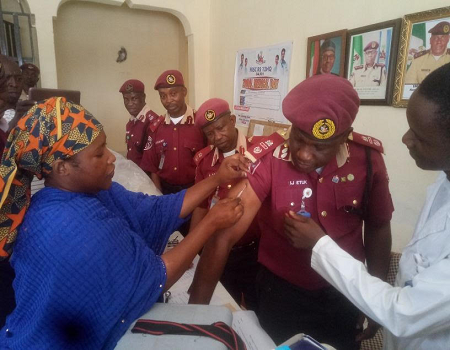 500 personnel of the Zonal and Bauchi State Sector Command of Federal Road Safety Corps (FRSC) have been vaccinated against Yellow fever which is rampaging as a killer disease at the moment.

This development is following the recent outbreak of the disease in Bauchi State which has so far led to the death of over 15 people mostly from two LGAs of Alkaleri and Tafawa-Balewa.

The vaccination exercise was carried out by the Bauchi State Primary Health Care Development Agency (BSPHCDA), on the FRSC Zonal and Bauchi State Sector Command officials on in the state.

Speaking shortly after he was vaccinated, the Zonal Commander, of FRSC, Assistant Corps Marshall, Imoh Etuk, commended the Bauchi State Ministry of Health for the gesture and noted that it will go a long way in protecting men of the Corps from being infected with the killer disease.

Related Topics:FRSCYellow Fever
Up Next