Get ready for nationwide strike over minimum wage - NLC 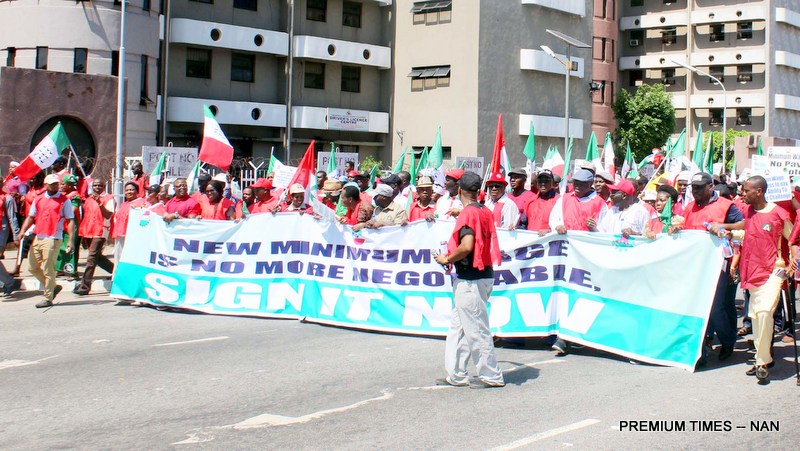 Ahead of the expiration of the ultimatum issued by labour unions over the minimum wage implementation, the unions have asked their branches across the country to get set for an industrial action.

Labour leaders had issued a communiqué, warning that economic activities would be shut on October 16 if the federal government failed to reconvene a meeting of the committee on consequential adjustments of workers salaries based on the new minimum wage.

The unions, led by the Nigeria Labour Congress (NLC), also insisted that the government should hold a final meeting on October 15 to resolve the disagreements.

The federal government and the unions have met on different occasions to deliberate and resolve the minimum wage controversy.

The latest meeting was held on Wednesday.

After the first phase of negotiations collapsed due to percentage differences between the two parties, the federal government’s negotiating team and the Joint National Public Service Negotiating Council, which is representing labour unions in the negotiation, are scheduled to meet again on October 15.

The meetings notwithstanding, labour unions are preparing for a strike action should their demands not be met.

He said the partial implementation of the minimum wage for levels one to six was a ‘divide and rule’ system that would be vehemently opposed by labour.

In furtherance to the union’s threat, the General Secretary of the NLC, Emma Ugbiaja, has now asked the union’s members to prepare for industrial action should no agreement be reached by Wednesday.

The major issue delaying the full implementation of the minimum wage is the percentage salary increase for certain categories of workers.

But the federal government had presented a proposal of 11 per cent salary increase for officers on grade level 07 to14 and 6.5 per cent adjustment for workers of grade level 15 to 17.

Also, the Director-General of the Nigeria Employers Consultative Association (NECA), Timothy Olawale, on Thursday said if labour unions and government fail to reach an agreement over the new minimum wage, the best option for labour unions is to approach the National Industrial Court instead of embarking on a strike.