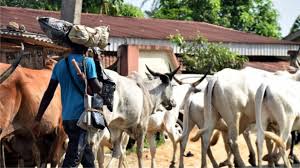 Fulani herdsmen scampered for safety when residents of Ijare community in Iferdore Local Government Area of Ondo State chased them out of town following complaints that the herders had been using their cows to destroy farm produce in the town.

The herdsmen who left their cows behind were pursued by youths led by the community’s chiefs.

The incident according to sources occurred after warnings have been given to herdsmen by the community.

It was gathered that the herdsmen refused to leave but went far into the innermost part of the town to rare their cows, a development that the community leaders were not comfortable with.

On Wednesday morning, the youths of the community traced the herdsmen and having seen the youths, the herdsmen took to their heels, leaving their cows behind.

The cows which were later arrested were taken to the palace of the town’s monarch.

The source said, “They have been adamant and it was high time they left. We didn’t harm them but we were surprised the way they ran away like being chased by a lion.

They have been destroying our farms and we could no longer condone such losses again.

We don’t have problem with them but we don’t want them and their cows in Ijare anymore.

Recall that Ijare community was where lightning killed 36 cows in 2019.

Related Topics:HerdsmenOndo State
Up Next