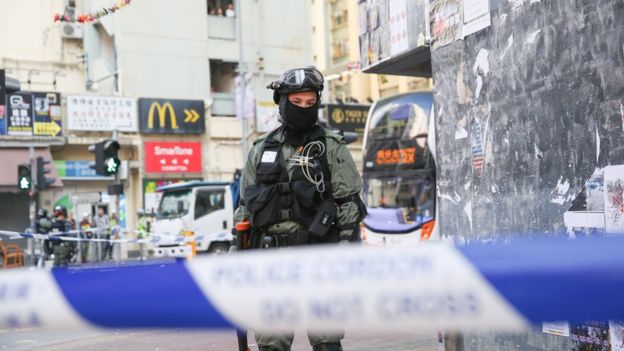 A policeman has shot at least one person during another day of violence and chaos in Hong Kong.

Footage shown live on Facebook showed the officer drawing his gun before grappling with a man at a roadblock.

Another man, wearing a face mask, then approaches and the officer shoots him, hitting him in the torso.

As the grapple continues, the officer fires another two rounds – although it’s not clear from the footage whether the bullets hit anyone.

There have been a number of other flashpoints, with police firing tear gas and rubber bullets in others parts of Hong Kong.

The shootings took place as protesters tried to block a junction at Sai Wan Ho on the north-east of the island.

Police confirmed that one officer “discharged his service revolver” and that “one male was shot”.

After being shot, footage showed the protester lying with his eyes wide open and with blood around him.

He is undergoing surgery and is in a critical condition, a Hospital Authority spokesman told the BBC. The spokesman said he was not aware of a second person being injured.

Authorities said that at two other places, officers also drew their firearms from their holsters.

However, police denied “totally false and malicious” reports that it ordered officers to “recklessly use their firearms” in Monday’s operations.

It’s the third time police have shot someone with live rounds since the Hong Kong protests began in June.

Related Topics:Hong Kong
Up Next