Husband arrested for chaining and torturing his wives in Katsina 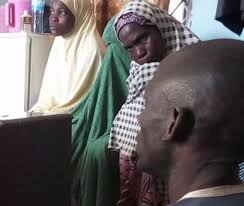 A man named Samaila has been arrested by men of the Katsina state police command for chaining his wives, Fatima Salisu and Hadiza Musa, and subjecting them to inhumane treatments in his home in Yannadabaiyye village in the Rimi Local Government Area of the state, for over 10 months

According to the police, Samaila’s evil deeds came to light when Hadiza’s mother paid them a surprise visit.

Not meeting with her daughter, Hadiza’s mother pleaded to take away a sewing machine she bought for her daughter who isn’t using it.

Samaila’s refusal led to an argument that degenerated into a fight. Hadiza’s mother went on to report the assault to the police at the Rimi Police headquarters.

The officers immediately went to effect Samaila’s arrest. It was during the arrest that Fatima and Hadiza were found in chains.

When interrogated, Fatima said she has been in chains for 10 months while Hadiza came in two weeks ago and was also placed under chains.

The women told the police that their husband used electric wires to beat them, cut their nails, shave their pubic hair and used it to form a concoction which he forced them to drink.

They told the police that their husband had sex with them whenever he liked in the full glare of the other wife.

The women said they had no idea what their husband does for a living but knew he always returned with wads of N500 notes.

The spokesman for the command, SP Gambo Isah, confirmed Samaila’s arrest and said the matter is currently being investigated.