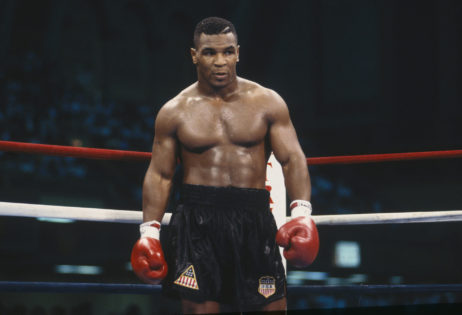 Mike Tyson has spoken openly about his addiction to recreational drugs during his fighting career, which led to him using a prosthetic penis in order to pass anti-doping tests

Mike Tyson has revealed he passed drug tests during his fighting career by using a fake penis called a “Whizzinator” – which contained clean urine from his wife or baby.

Throughout his career, ‘Iron’ Mike who was subjected to stringent drug testing during his fighting days, dabbled in his fair share of recreational drugs – specifically cannabis.

And the former undisputed heavyweight champion took great precautions to avoid getting caught before a fight such that when asked to provide urine samples, he would wear a prosthetic penis called a “Whizzinator” in order to hand over a clean specimen.

The Whizzinator would be filled with urine from either his wife or baby, which allowed him to pass the test without issue before competing in the ring.

“I put my baby’s urine in it,” Tyson said on the Hotbox’ with Mike Tyson podcast.

“And sometimes, one time I was using my wife’s and my wife was like: ‘Baby, you better not hope that it comes back pregnant or something.’

“And I said, ‘Nah, we ain’t gonna use you any more, we’re gonna use the kid.’ Cuz I got scared that the p*** might come back pregnant.

Tyson is set to make a sensational return to boxing later this month in a controversial exhibition bout with Roy Jones Jr.

The legendary pair, both in their 50s, will go head-to-head in eight two-minute rounds at the Staples Centre, Los Angeles.

“I feel magnificent. I’ve been training, someone gave me a proposition to fight,” Tyson said during their pre-fight press conference last month,

“It went from Shannon Briggs to someone else and now I’m fighting Roy.”

Related Topics:Mike Tyson
Up Next