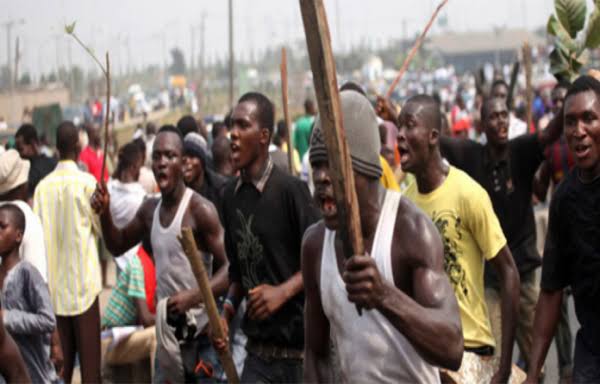 Some Youth in zone c have protested the wanton and arbitrary arrest some of them by men of the Intelligent Response Team (IRT) an arm under the Nigeria Police force.

Speaking with correspondent on Saturday in Otukpo infront of the the police station, one of the protesters Emmanuel said since IRT came to Otukpo they have been arresting poeple with none prosecuted but rather only negotiate bail from five hundred thousand naira, one million naira and above which they collect, set such person free only to re-arrest such again .

Mr Emmanuel Iduh said the protest is so the IGP can hear from them the youth who are being molested at random since the officers claim to be from the him, he went on to say that they want the council chairman, Ochi’doma, Ocho’otukpo and other relevant authorities to hear and know their plight so the situation can be brought to a stop.

A leader of the concerned youth Augustine oga Elaigwu said the protest was to make their grievances known to relevant authorities , he also that they met with the area commander Mr Ibrahim Zakari to record their complain.

President, Concerned Idoma People (CIP), Ondaje Ogwuche said a letter was taken to the area command with their complain and some instances where the IRT took the law into their hands.

The Otukpo area commander, Mr Ibrahim Zakari who spoke with our correspondent said he met with the protesting youth and advised them to take the legal approach which would be written to the state commissioner of police, copy the Otukpo area command so it can be forwarded to the IRT office in Abuja for further action.

The protesters could be seen with placards carrying inscription should as Bail? #100,000.00, #500,000.00; Sgt Augustine Excavator you have no right to kill; IGP-IRT take your operatives to North and South- East; inspector general of police…. Withdraw the IRT in Benue state immediately they are killer cops.