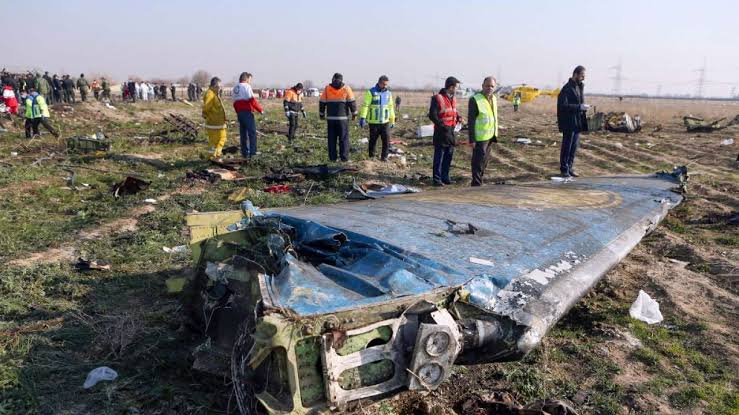 A report by BBC indicates that the government of Iran mistakenly shot down the Ukrainian plane that crashed on Wednesday, January 8, near Tehran with 176 people on board.

CBS news reported that US officials said they believe the Ukrainian international airlines Boeing 737-800 was hit by a missile.

Ukraine earlier said it was examining whether a missile strike brought down the aircraft but was ruled out by Iran. The crash came just hours after Iran carried out missile strikes on two airbases housing US forces in Iraq.

According to the report, CBS news quoted US intelligence sources as saying a satellite detected infrared “blips” of two missile launches, followed by another blip of an explosion.

The report noted that the Newsweek had quoted a Pentagon and senior US intelligence officials, as well as an Iraqi intelligence official, as saying they believed the Ukrainian plane was hit by a Russian-made Tor missile. US President Donald Trump on Thursday, January 9, said that, “I have my suspicions” over the plane. “Somebody could have made a mistake.” It would be recalled that amid tensions heightened by the US killing of top Iranian general Qasem Soleimani on Friday, January 3, Iran has said it would not hand over the recovered black box flight recorders to Boeing, the plane’s manufacturer, or to the US.

Under global aviation rules Iran has the right to lead the investigation, but manufacturers are typically involved. BBC further stressed that in separate reports, CBS news and Newsweek said US and Iraqi intelligence officials were confident the Ukrainian plane was brought down by a missile fired by Iran.

CBS published a brief report on Twitter, saying the officials were confident the plane was shot down. It said this information was based on US intelligence, which sources said picked up signals of a radar being turned on. US satellites also reportedly detected two missile launches shortly before the Ukrainian plane exploded. Newsweek quoted US and Iraqi officials as saying they believed the aircraft was hit by a Russia-built Tor M-1 surface-to-air missile system, known as Gauntlet by Nato.

Related Topics:IranUkraineUS Media
Up Next

Meghan, Prince Harry to quit as senior royals, might move to Canada