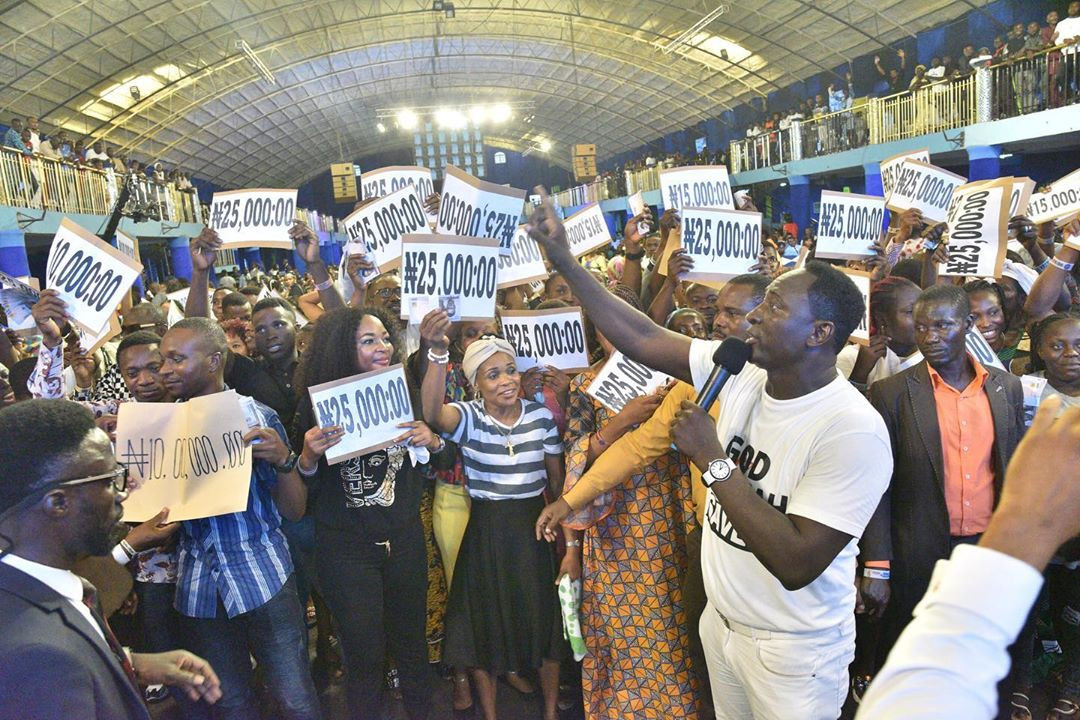 The gesture saw over 50,000 worshippers’ troop to church despite the heavy rain to attend the service tagged ‘The father’s blessing’. The man of God, Prophet Jeremiah Omoto Fufeyin had announced that members should come to church to receive N10, 000,000 million naira cash gift.

Theresa Moses, the Church’s publicist, said Prophet Omoto-Fufeyin explains that sacrifice breaks protocol; the father’s blessings need an action to cause a reaction. “A sister to the wife of a top politician in Nigeria challenged my God that if she is able to get married pledge to give my God the sum of N10,000,000 million naira. I also promised that when she fulfills her vow I will share the money among members of the church.

“My God answered her and she got married. When it was time to redeem her vow she said until she gets pregnant. I called upon my God and He answered me. She got pregnant and delivered successfully like a Hebrew woman. She came to testify to what God has done but refused to fulfill her vow”.

Reading from the Book of Ecclesiastes 5:5 NIV which says: “It is better not to make a vow than to make one and not fulfill it. Since the woman refused to fulfill her vow, I decided to fulfill my own pledge because my God has blessed me more than N10, 000,000 million naira; money is not my problem”.

The money, according to Theresa Moses, was distributed through scratch card. What you scratch is what you win. But workers of the ministry are not eligible to partake in the exercise. After distributing the scratch card for almost two hours, over 405 persons got cash gifts in naira and dollars while others were; Go to the mountain, you’re victorious, be prayerful, amongst others.

During the church service the famous clergy prayed for peaceful election in Bayelsa and Kogi states this weekend as he predicts the outcome of the election. “The same way I reveal the secret on the postponement of the presidential election early this year, it’s the same way I’m telling you; they will end up in court” he said.

It could be recalled that his predictions early this year over the postponement of the general election and the outcome of the election went viral like wildfire. On the 7th of February, 2019 the Tireless General Overseer as he’s fondly called prophesied that the 2019 general election will be postponed.