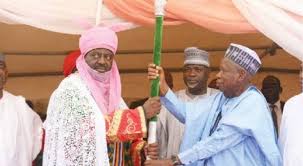 The Kano state government on Monday, March 9, finally dethroned Emir of Kano, Muhammad Sanusi II, who has been under much heat throughout the Emirate crisis rocking the state.

Usman said that the emir’s action violated the part 3 section A-E of Kano state law and that his removal was a decision reached after a lot of consultation with all relevant stakeholders.

Following the removal of Muhammad Sanusi II as the emir of Kano, the state government has announced Alhaji Aminu Ado Bayero as the new emir for the ancient town.

The governor had been at loggerhead with Emir Sanusi and many see the fresh probe as a continuation of the initial crisis that led to the creation of an additional four new emirates in the state.

Woman beheaded by ritualists for N150,000 in Akwa Ibom