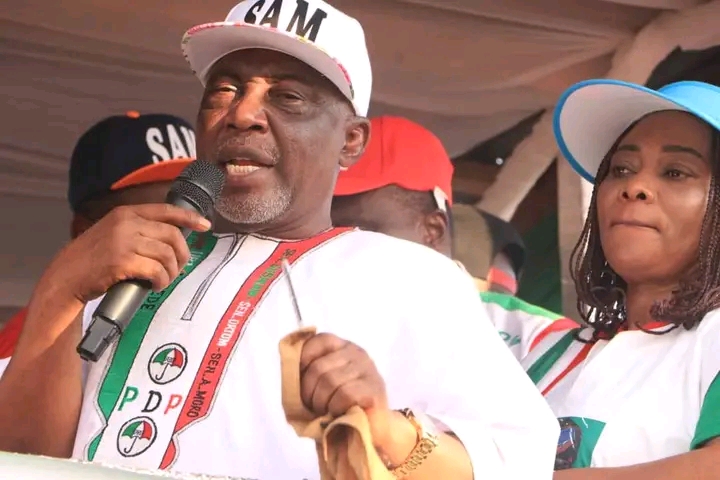 Governor Samuel Ortom has assured the people of Benue zone C that the PDP will further work for the improvement of the state.

The Governor gave this assurance on Monday, in Oju during the flag-off of Senator Abba Moro’s senatorial campaign for his reelection into the Nigeria Senate.

Governor Ortom commended the people of Benue South for their commitment to the party and promised that those elected on the platform of the party will continue to do their best to bring development to the state.

Senator Abba Moro dismissed media reports credited to him on the PDP crises at the national level on the crisis of that party saying it was the handiwork of mischievous elements, he also gave some of his achievements while promising to do more including the construction of the Otukpo, Obi/Oju road.

Senator Moro disclosed that he had sponsored 13 bills in the Senate, some of which include, a bill canvassing for the establishment of the North Central Development Commission, Rotation of Power among political blocs and Local Government Autonomy among others.

Senator representing Benue North-East, Dr. Gabriel Suswam in his solidarity message described Senator Moro as a grassroots politician and voice that cannot be ignored in the Senate and politics of Nigeria.

Deputy Governorship candidate of PDP in the State, Sir John Ngbede who spoke on behalf PDP Governorship candidate, Engr Titus Uba said the state would be sending a balanced team to the National Assembly while calling on the people to collect their Permanent Voters Card, PVs to ensure they vote en masse for PDP candidates in the forthcoming polls.

The Acting State Chairman of PDP, Hon Isaac Mffo saying the party is an inclusive political platform, charged the candidates to carry everyone along in their campaigns.

Earlier, director general for senator Abba Moro’s campaigns, Dr. Elijah Adakole stated that with the track record of performance of Senator Moro in the areas of health, infrastructure and education the people of the zone were ready to re-elect him and vote for all PDP candidates.

The Chairman of the occasion, Elder Christopher Abah and Chairlady, Mrs. Ene Edache in their separate remarks pledged their readiness to mobilize support for all PDP candidates.

High point of the day was the presentation of the party flags to all aspirations in Benue south senatorial zone.