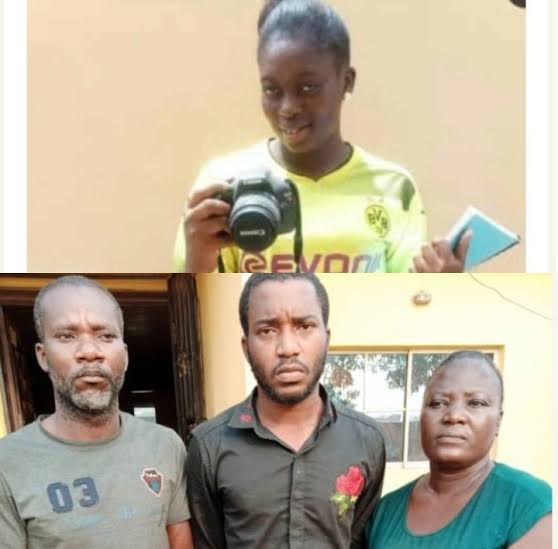 Suspected killers of  Favour Daley-Oladele on Saturday narrated the gory details of how the  final year Sociology student of Lagos State University (LASU) was gruesomely murdered for money rituals at Ikoyi-Ile in Osun.

Osun Commissioner of Police, Babatunde Kokumo, led detectives from the Homicide Section of the command during the exhumation operation.

When the remains was exhumed, the head, the two breasts, neck and part of the two legs were no longer there.

The deceased was allegedly killed by a prophet, Segun Philip, 42, and her boyfriend, Adeeko Owolabi, 22, in Ikoyi-Ile, Osun, on Dec. 8, for money rituals.

Owolabi’s mother, Ruth was also said to have played a role in the dastardly act.

Owolabi, also a graduate of LASU, told newsmen during operation that he conspired with the prophet to murder her girlfriend for money rituals.

According to him, he lured the deceased to Ikoyi-Ile and lodged her in an hotel before killing her.

“After I lodged her in a guest house, I took her to a house which I claimed to be my uncle’s house, knowing fully well that the place was a ritualists den.

Narrating he said “I smashed a pestle on her head and she collapsed.

“The prophet thereafter used a knife and cutlass to dismember her body which was divided into three parts breasts, head and legs with other vital parts.

“We buried the remaining part of her body beside Prophet Philip’s Church called ‘Solution Salvation Chapel’, while some vital parts was given to my mother to eat for spiritual cleansing,” he said.

Also speaking with newsmen, Segun Philip, who claimed to be a prophet in Solution Salvation Chapel, said the deceased was murdered to make money rituals for Owolabi.

“I am not a prophet but a herbalist who engages in spiritual cleansing for whosoever come to my place.

“I used the Solution Salvation Chapel as a cover up not to allow people know the true picture of who I am and what I do.

“Owolabi came to my place for money rituals and I told him that we need a complete human being for the rituals.

“And on December 8, he brought his girlfriend to my church and we killed her and as well dismembered her body part for money rituals.

Owolabi’s mother, Ruth, who also spoke with newsmen said she was not aware that the concoction given to her to eat and the cream was made of human part.

The police commissioner said detectives carried out thorough investigation to ascertain the actual place the deceased was buried, adding that the police would ensure that justice prevailed in the matter.

Related Topics:LASURitual Murder
Up Next