Lady Gaga, others calls out Trump for being a 'racist' over George Floyd's death 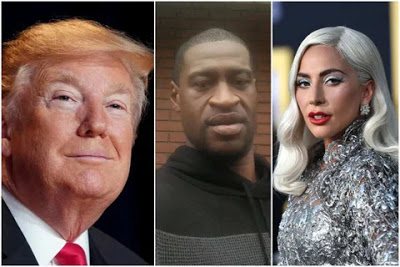 Celebrities continue to raise their voices to demand justice for George Floyd, an African American man who died on May 25 after a police officer in Minnesota knelt on his neck for nearly nine minutes.

The Minnesota police cited “medical reasons” behind George Floyd’s death, however, nationwide protests started after a video showed policeman Derek Chauvin kneeling on the 46-year-old man’s neck even as he groaned and pleaded: “Please, the knee in my neck, I can’t breathe.”

The incident was witnessed by several locals who recorded the video and said that Floyd was “not resisting arrest” after being taken into custody for allegedly attempting to use a counterfeit $20 bill at a deli.

Several A-list celebrities including Barack and Michelle Obama, Beyonce, Lady Gaga, and Rihanna took to their social media accounts to demand action against the responsible policeman, who was arrested three days after the FBI began a civil rights investigation into the matter.

Chauvin has been charged with third-degree murder and second-degree manslaughter, but Floyd’s family has been requesting a first-degree murder charge on Chauvin and the arrest of the other three police officers involved in taking Floyd into custody.

The three police officers have been suspended.

In her post this is what Lagy Gaga wrote;

Chinese nationals evacuated from Nigeria due to Coronavirus pandemic