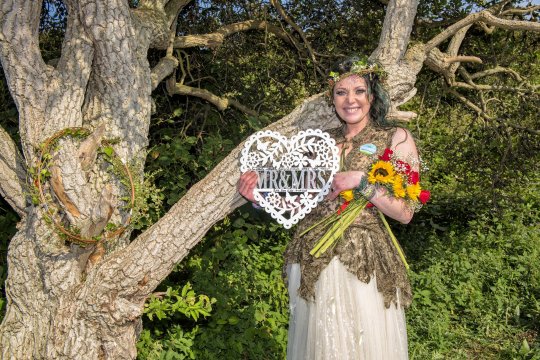 A 34-year-old woman and mother of two, Kate Cunningham has ‘tied the knot’ with a tree located at Rimrose Valley Park, Merseyside, England.

The bizarre, grand nuptial was held on September 7 with family and friends present to witness and celebrate the occasion.

Cunningham who hails from Melling in Merseyside and works as an environmentalist, decided to ‘marry’ the tree located at Rimrose Valley Park to protest against plans of a three-mile dual carriageway set to be built through the park.

Photos from the ceremony have been circulating the internet and reflecting how far a human can go to protect the life of a tree.

The mother of two whose boyfriend assisted with the wedding preparations was present at the occasion.

After the union, Cunningham changed her name to Kate Rose Elder, bearing a new name after her new ‘husband.’

It was gathered that local residents have been protesting against the plans of building a road through the park and most had stated that it was destruction of a valued green space.

There are hopes that Cunningham’s union with the tree will halt the plans.

The ‘wedding’ ceremony was attended by family and friends as well as local residents of the area.

Related Topics:EnglandKate Rose Elder
Up Next