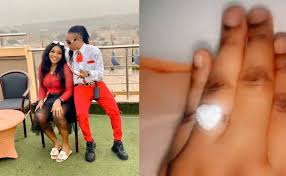 A lady in Edo state has reportedly proposed to her girlfriend at a cute romantic event. The lady identified as Michell Unukpo announced the proposal on social media to celebrate it.

The lady shared photos of herself and her girlfriend on her Facebook page. The couple was seen together having a good time on a rooftop.

In the photos, Unukpo was spotted wearing a white shirt paired with a red jean and red scarf tie. Her girlfriend matched the red theme in a red top paired with a black skirt.

Unukpo, who announced their engagement on Facebook, also celebrated the fact that her girlfriend said yes. She gushed about her girlfriend, saying she has been amazing to her since they have known each other. Unukpo also professed her love in the post.

After announcing her engagement, the ladies received backlash on Facebook from people opposed their union. In another post, Unukpo addressed the backlash, thanking everyone who congratulated them and talked about their relationship. She also shared a video of the ring she proposed with.