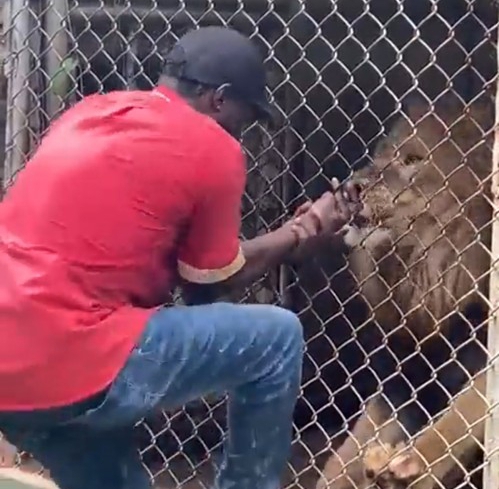 A lion in a Jamaican Zoo stunned visitors after attacking an attendant and biting of his finger.

POLITICS NIGERIA learned that the Incident occurred around 4pm on Friday.

An eyewitness at the scene revealed that the tour of the zoo was coming to an end when the zoo attendant in an effort to impress visitors, attempted to pet the lion.

The lion became agitated as the attendant put his hand through the cage and it quickly bit his right finger.

“When it happened, I thought it was a joke. I didn’t think it was serious. I didn’t realise the seriousness of it, because it’s their job to put on a show,” she said.

“Obviously, when he fell on the ground everybody realised that it was serious. Everybody started to panic,”

“The entire skin and about the first joint of his finger was gone,” she said.

Related Topics:#SosscopeJamaicaZooZoo Attendant
Up Next