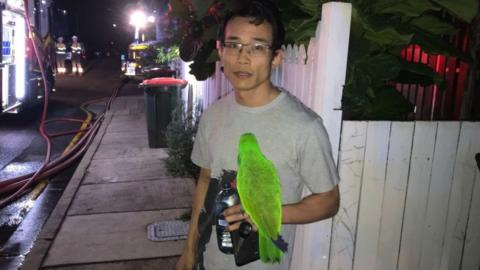 An Australian man says he was able to survive a late-night house fire after his pet parrot roused him from bed.

Anton Nguyen had been fast asleep when his two-storey house caught alight in Brisbane, Queensland, on Wednesday.

“I heard a bang and Eric – my parrot – he started to yell so I woke up and I smelled a bit of smoke,” he told ABC.

“I grabbed Eric, opened the door and looked to the back of the house and saw some flames… and so I took off and bolted downstairs.”

By the time firefighters arrived at about 01:00 local time (14:00 GMT Tuesday), the house was engulfed in flames.

It took four crews over an hour to contain the blaze in the suburb of Kangaroo Point.

Mr Nguyen, who lives alone, said he had escaped with the bird and a bag, and suffered no injuries.

The cause of the blaze is unknown and remains under investigation.