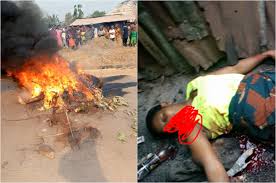 An indigene of Nkporo community in Abia who reportedly shot and killed his wife over a minor issue on January 27, was beaten and set ablaze by other residents of the community.

Facebook user Eunice Ogbonna in  a tribute to her sister and mother of 6 identified as Mercy Chichi, revealed that she built a house and also bought a car for her husband Kalu Ilum before her death.

She also revealed that Mercy Chichi disclosed that she was tired of her marriage to her abusive husband but chose to stay because of her children.

Kalu reportedly jumped into a well to escape mob action after shooting his wife while she was preparing their children for school around 7a.m. However after he got out, he was beaten to death and set ablaze by the mob that also destroyed his house.

Kalu better bring my sister back after everything she don for you build house for you, by car is shall never be well with you.