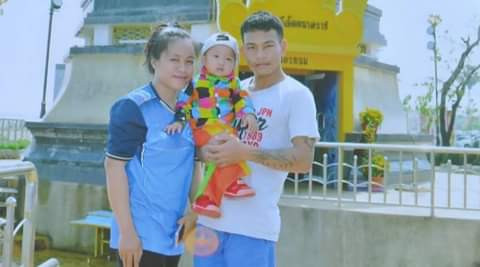 A 23-year-old woman is fighting for life after she was set ablaze by her husband in Ban Pheung,  Muang district of Nakhon Phanom, Thailand, for refusing to reconcile with him.

The man identified as Uthen, 26, doused his wife Maithong, with gasoline and set her ablaze after putting her in a headlock.

Maithong is barely alive in a hospital in Udon Thani. She has burns to almost 100% of her body and is in a comma in ICU.

Uthen was also burned but is out of danger. He is still recovering in the same hospital.

According to the police, the couple had been together for 3 or 4 years but broke up some months ago after repeated arguments. They have a one year old son together.

The husband went to the wife’s house after she refused a reconciliation. Police said there was no doubt about his intentions as he brought the gasoline with him.

On Thursday, November 28, women and children’s rights activist Paveena Hongsakul went to visit the wife in hospital in Udon.

Relatives had complained to her after the case did not move forward.

However, Police on their part said they are waiting on what happens to the wife before proceeding.

An aunt of the victim named Sripraphai, 48, said that the suspect and her niece had split up and he had tried many times to get back together with her but she was not interested.

Narrating the ordeal she said “ Uthen arrived on a motorcycle and immediately threw down his helmet in a rage. He then got his wife in a headlock and doused her in gasoline and set fire to her.

It all happened so quickly relatives could do nothing to stop it, she said.

Instinctively the wife got up and ran to the bathroom where relatives helped to extinguish the fire on her clothes.

There were still bits of clothing and evidence of the fire at many spots in and around the house.