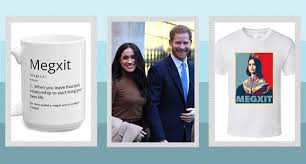 An abundance of Megxit-themed items inspired by the Duke and Duchess of Sussex stepping back as ‘senior’ royals are being sold on sites such as Amazon and Etsy.

The public had plenty of thoughts on this and the shocking scenario was soon branded #Megxit on social media and people have now taken it one step further than just posting funny tweets and memes, as they’ve started making some actual Megxit-themed merchandise to mark the occasion.

Everything from t-shirts to cushions inspired by the Duke and Duchess of Sussex quitting have gone on sale on websites such as Etsy, Amazon, Redbubble and Zazzle.

On Etsy you can buy the motivational Megxit mug of your dreams for £11.18 plus postage and packaging.

The mug, made by MoonsicalStudios, defines Megxit as a noun and reads: “1. When you leave that toxic relationship to start living your best life.

“Ex: Harry pulled a Megxit and is moving to Canada.”

While FinalGirlTShirts have made a top and a mug which feature a cartoon of Meghan Markle and a take on a quote from Regina George in Mean Girls.

It proclaims: “Get in loser, we’re quitting monarchy.”

Over on Amazon there are 250 items to choose from when you search Megxit, including cushions, tote bags and popsockets for your phone.

Similarly RedBubble and Zazzle are selling T-shirts which feature slogans such as “Keep calm and Megxit on” and “Keep calm and cut the cord #Megxit”.

Another proclaims: “I don’t want my grandma to control my social media either #SupportHarry.”

Prices for these range from £14 to £20 depending on the design.

The influx of merchandise comes just days after Harry and Meghan revealed their big news.

Related Topics:AmazonEstyMeghan MarklePrince Harry
Up Next