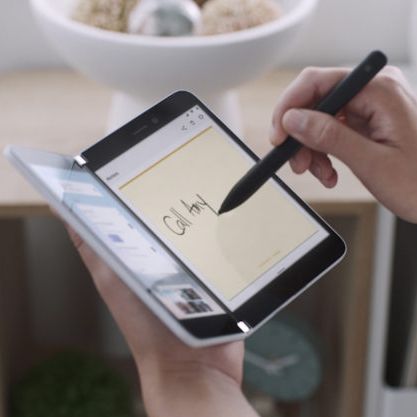 Microsoft has announced a new mobile phone set to arrive around Christmas time next year.

Unveiled during this week’s Surface event, the company brandished designs for its Surface Duo foldable phone, which will run specifically on Android.

The design of the device is very similar to Microsoft’s dual-screen Surface Neo laptop – also newly-announced – but obviously this one’s a pocket-size version.

It’s a very cool addition to the technology market and it’ll be interesting to see if Apple chooses to follow a similar path in the future.

Each display can simultaneously run a different app, or alternatively, the Duo can be turned into landscape mode – allowing one of the screens to be used as a keyboard or game controller.

Although the device has been confirmed this week, Microsoft wants to allow developers enough time to build apps for this new and exciting hardware – hence the late 2020 release.

Related Topics:Microsoft Phone
Up Next