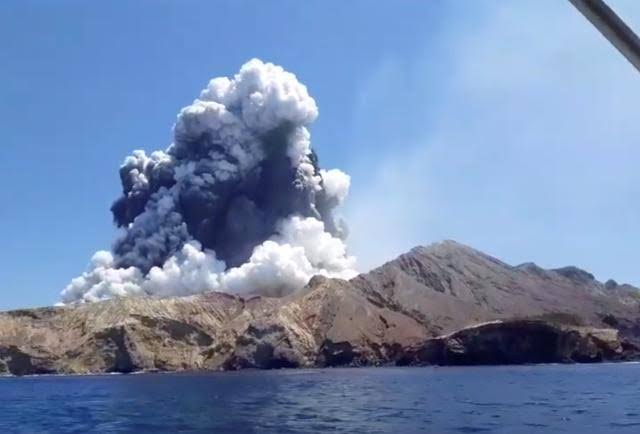 More than two dozen people were feared missing on Tuesday, a day after a volcano that is a tourist attraction suddenly erupted off the coast of New Zealand’s North Island, killing at least five people and injuring up to 20.

Police said early on Tuesday they did not expect to find any more survivors from the volcanic eruption, which occurred on White Island on Monday at about 2:11 p.m. (0111 GMT), spewing a plume of ash thousands of feet into the air.

About 50 people, New Zealanders as well as foreign tourists, are believed to have been nearby at the time and several were seen near the rim of the crater minutes before the eruption.

Rescue services have been unable to reach White Island as it remains too dangerous.

Tour operators took some people off the island before it was declared unsafe. Twenty-three people were rescued, police said on Monday, adding that others were still on the island.

Many day tours visit the island regularly. One from a 16-deck cruise liner, Ovation of the Seas, was there at the time.

Several people with burn injuries were brought by helicopter to Whakatane, the nearest town on the mainland.

“I know there will be a huge amount of concern and anxiety for those who had loved ones on or around the island at the time. I can assure them that police are doing everything they can,” Prime Minister Jacinda Ardern told a news conference after landing in Whakatane late on Monday.

White Island is about 50 km (30 miles) from the east coast of North Island and huge plumes were visible from the mainland. Volcanologists said the ash plume shot 12,000 feet (3,658 m) into the air.

Geological hazard tracker GeoNet raised the alert level for the White Island volcano in November due to an increase in volcanic activity.

The White Island volcano’s last fatal eruption was in 1914, when it killed 12 sulfur miners. There was a short-lived eruption in April 2016. Daily tours allow more than 10,000 people to visit the volcano every year.

About 70 percent is under the sea, making the massive volcanic structure the largest in New Zealand.