My brother forced to have sex with me - Abducted Lady (Photos) 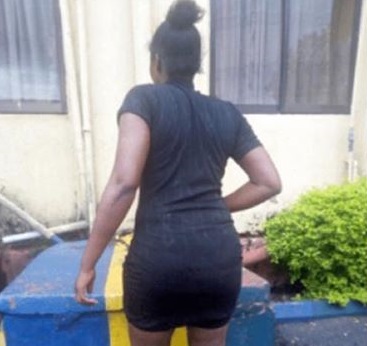 A 20-year-old girl, Chioma Dioke, yesterday narrated how kidnappers forced her elder brother to have sexual intercourse with her  inside bush called Sambisa forest located in Ezzagu in Ebonyi State.

Chioma, her brother and another victim, had gone to Onunwafor, Ezzagu, for business purposes before they were kidnapped and held  hostage for five days before Police came to their rescue.

The business involved a modality in which the people of the community were investing money and were receiving high amounts as their returns.

However, the owner of the investment business reportedly ran away from the community with the payments made by their customers without the  knowledge of Chioma and her brother. In anger, the youths abducted Chioma and her colleagues and held them hostage in the bush.

Narrating her ordeals after her rescue from the kidnappers’ den, Chioma said she was repeatedly raped by boys from the community while others used hands, rods and sticks and inserted into her private part.

“After they finished molesting me, they said my elder brother must have sex with me. They carried my brother, beat him up thoroughly and ordered him to start having sex with me.

My brother told them that it was against our culture. They insisted that he must do it and pointed a gun at his head. My brother had no option than to have sex with me,” she added.

Police eventually got wind of the incident and stormed the forest, killing two persons and rescued the victims.

Woman flogged for dating another man in Saudi Arabia