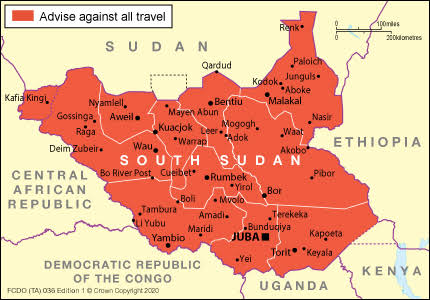 A taskforce has been sent to South Sudan by World Health Organisation to investigate an unidentified illness, which has killed 89 people, BBC reports.

The country’s Ministry of Health reported that an unknown disease had killed scores of people in the Northern town of Fangak in Jonglei State.

The WHO sent a rapid response team of scientists to the area, which is one of the worst hit by recent severe flooding, to collect samples from sick people.

“We decided to send a rapid response team to go and do risk assessment and investigation; that is when they will be able to collect samples from the sick people – but provisionally the figure that we got was that there were 89 deaths,” Sheila Baya, from the WHO, told the BBC.

Baya said the team of scientists had to reach Fangak via a helicopter due to severe flooding in the area, adding that the group is waiting for transport to return them to the capital, Juba, on Wednesday.

In the bordering state of Unity, severe floods have increased the spread of diseases such as Malaria and caused malnutrition in children due to food shortages, Lam Tungwar Kueigwong, the state’s Minister of Land, Housing and Public Utilities, said.

Oil from the fields in the region had contaminated the water, he said, leading to the death of domestic animals.

The flooding in the North of South Sudan has cut off communities from accessing supplies of food and other vital commodities.

More than 700,000 people have been affected by the worst flooding in the country for nearly 60 years, the U.N. refugee agency, UNHCR said, blaming climate change.